main-content
Top
Back to the search result list
​
print
Table of Contents
​
insite
Issue archive
​
archive
​
insite
Print
​
print
​
share
previous article The significance of the Culture Based Model in ...
next article You, robot: on the linguistic construction of a...

This article describes the phenomenon of knowledge building in online environments. Knowledge building is a process within a community, which leads to the development of knowledge. In order to analyze this process, we will look into the ways in which individuals interact with the collective as a whole. For this purpose, the psychic and social systems, which are involved here are regarded as meaning-based systems in the sense of Luhmann’s systems theory—open to the environment, but operatively closed. The respective modes of operation of psychic and social systems will be examined, and “structural coupling” between these systems described. Another characteristic of knowledge-building communities is self-organization, which is described here in the sense of autopoiesis. A pivotal task, which knowledge-building communities have to tackle, is to handle complexity and reach common understanding. These aspects will also be described using conceptualizations of Luhmann’s systems theory, illustrated by many examples. 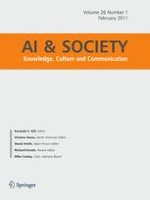 Beyond logic and rhetoric: the argumentative scientist

You, robot: on the linguistic construction of artificial others

An architectural history of metaphors

Robots and the changing workforce