Create an alert for Peer-to-Peer Networking and Applications now and receive an email for each new issue with an overview and direct links to all articles.

BitTorrent swarms rely on reciprocative chunk exchanges among autonomously participating peers. It has been shown that BitTorrent native tit-for-tat mechanism cannot effectively discourage the peer strategic misbehavior such as free-riding and fake chunk attack. This paper proposes a hierarchical chunk cipher scheme based only on bits circular shifting manipulation. As such, encrypted chunks preserve a fraction of information entropy of original chunks that can be observed by the receiving peers directly, which is used for assuring authenticity of the encrypted chunks. Our hierarchical bits shifting scheme allows more flexibility on the fraction of information entropy exposed directly by the encrypted chunks, when compared to the single layer bits shifting scheme. Further, exact mathematical results between the hierarchical scheme and the single layer scheme are derived and analyzed in detail.
Advertisement 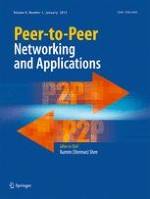 A multi-faced measurement study on a large private BitTorrent community