Finding regions of similarity between two data streams is a computational intensive and memory consuming problem, which refers as sequence alignment for biological sequences. Smith-Waterman algorithm is an optimal method of finding the local sequence alignment. It requires a large amount of computation and memory space, and is also constrained by the memory access speed of the Graphics Processing Units (GPUs) global memory when accelerating by using GPUs. Since biologists are commonly concerned with one or a few species in their research areas, SpecAlign is proposed to accelerate Smith-Waterman alignment of species-based protein sequences within the available GPU memory. It is designed to provide the best alignments of all the database sequences aligned on GPU. The new implementation improves performance by optimizing the organization of database, increasing GPU threads for every database sequence, and reducing the number of memory accesses to alleviate memory bandwidth bottleneck. Experimental results show that SpecAlign improves the performance by about 32 % on average when compared with CUDASW++2.0 and DOPA with Ssearch trace for 100 shortlisted sequences on NVIDIA GTX295. It also outperforms CUDASW++2.0 with Ssearch trace for 100 shortlisted sequences by about 52 % on NVIDIA GTX460. 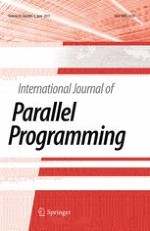 OFScheduler: A Dynamic Network Optimizer for MapReduce in Heterogeneous Cluster

YuruBackup: A Space-Efficient and Highly Scalable Incremental Backup System in the Cloud