‘Rooms’ and ‘spaces’ are two closely linked forms of accommodation where the unit of occupation and exchange is a portion of a larger building or property, within which services and facilities are shared. Through participant observation and qualitative interviews, this study explores two buildings featuring informal rooms and spaces and one building featuring formal rooms and spaces in Johannesburg’s inner city. The research demonstrated the incredible resilience of occupants in the face of an extreme shortage of affordable accommodation in Johannesburg’s inner city (Tissington 2013). Rooms and spaces in the inner city represented two of very few typologies research participants were aware of that allowed them access to the livelihood opportunities Johannesburg had to offer. The flexibility and diversity of rooms and spaces on the informal market enabled occupants to cope with insecure livelihood opportunities. While formal rooms represented the most stable support to those specific occupants, there were several ‘barriers to entry’ including the prerequisite of a stable income. However, the findings suggested an adverse relationship between accommodation and livelihoods demonstrated by the three ‘forms’ of rooms and spaces, where the only form available to people with the least secure livelihoods is that which, in turn, subjects them to the greatest insecurity. While one should ‘do no harm’ where aspects of accommodation are ‘currently working’ (Carey 2009:2), there is scope for targeted and differentiated intervention in some forms of rooms and spaces, in support of livelihoods. 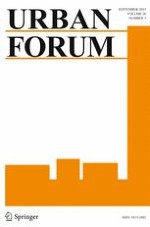 Enclaves on Edge: Strategy and Tactics in Immigrant Business Spaces of Johannesburg

Urban Impacts of Resource Booms: the Emergence of Oil-Led Gentrification in Sekondi-Takoradi, Ghana

Integral Theory: a Tool for Mapping and Understanding Conflicting Governmentalities in the Upgrading of Cape Town’s Informal Settlements