Swipe to navigate through the chapters of this book

This chapter begins with the three-dimensional (3-D) Helmholtz equation governing acoustic wave propagation in an infinite rigid-wall elliptical cylindrical waveguide carrying a uniform mean flow. The 3-D acoustic pressure field is obtained as modal summation of rigid-wall transverse modes in terms of the angular and radial Mathieu functions and complex exponentials. A well-known algorithm is presented for computing the expansion coefficients of even and odd angular Mathieu functions based on a set of infinite recurrence relations formulated as an algebraic eigenvalue problem. The modified or radial Mathieu functions are computed using a rapidly converging series of products of Bessel function. Rigid-wall condition is imposed at the elliptical boundaries by setting the derivative of modified Mathieu functions to zero, and root-bracketing in conjunction with the bisection method is used to numerically compute its parametric zeros q. The corresponding non-dimensional resonance frequencies of the transverse (rigid-wall) radial, even and odd circumferential/cross-modes of the elliptical waveguide are tabulated for aspect-ratios ranging from \(D_{2} /D_{1} = 0.01\,{\text{to}}\,1.0\). The tables show that for a highly eccentric ellipse, i.e., \(e \to 1\) (small aspect-ratio), the resonance frequencies of the even modes are significantly smaller than those of its odd counterpart. With an increase in aspect-ratio, the resonance frequencies of odd modes gradually approach those of the even modes, and for ellipse with \(e \to 0{\text{ or }}D_{2} /D_{1} \to 1\) the even and odd modes coalesce to the circular duct mode. The mode shapes corresponding to the first few radial, even and odd modes are presented for a few aspect-ratios whereby one can visualize changes in modal pressure distribution as the ellipse approaches a circle. Development of interpolation polynomials which facilitates an easy evaluation of the resonance frequencies for a given mode type is a useful outcome in engineering acoustics. is considered in Tables 2.29 and 2.30, and the non-dimensionalization variable D 1 is kept constant in these Tables.
Table 2.30
Non-dimensional resonance frequencies of odd circumferential/cross-modes of an elliptical membrane clamped at the boundaries for a range of aspect-ratio 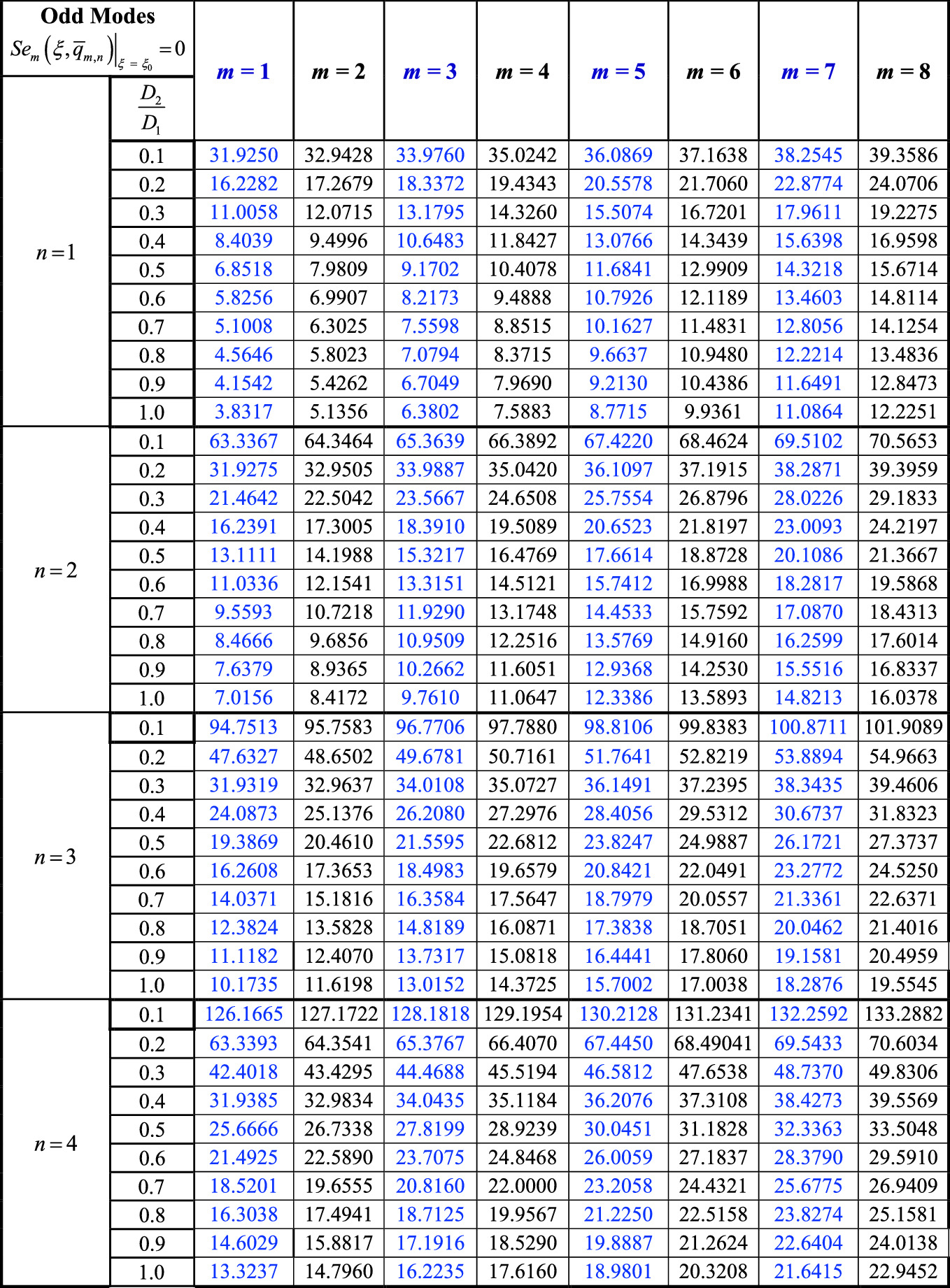