Create an alert for Meccanica now and receive an email for each new issue with an overview and direct links to all articles.

A theoretical and experimental study has been undertaken, under ESA contract, by a team including GMV, the University of Bologna and EADS-Astrium, to assess the feasibility of an entry descent and landing (EDL) vehicle based on unpowered rotary decelerator. A deployable rotor with telescopic blades is considered, aimed at replacing all the standard deceleration devices for a descent module (parachutes, airbags, and retrorockets) except for the heat shield, with Mars as the main planetary target. This paper deals with the aerodynamic assessment of the proposed vehicle configuration. The objectives are twofold. First, a proof of concept of the main autorotation related events, viz. blades deployment from folded configuration in supersonic or transonic regime and telescopic blades extension in subsonic regime, is experimentally analyzed. Second, a characterization of the vehicle performances in terms of aerodynamic drag, lift to drag ratio and rotor angular speed is accomplished. Experiments are performed in the supersonic wind tunnel of Von Karman Institute of Fluid Dynamics and in the low speed wind tunnel of the University of Bologna. The vehicle is found to feature longitudinal static stability within the tested range of angles of attack. Multivalued rotor angular rates are found at subsonic speeds, corresponding to stalled and unstalled operation, with major differences in the achieved decelerating performances. Overall, the autorotation with telescopic blades is regarded as a viable concept for Mars EDL.
Advertisement
previous article Influences of wear on dynamic characteristics of angular contact ball bearings
next article Effects of flexible bottom on radiation of water waves by a sphere submerged beneath an ice-cover 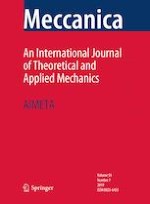