An Analysis of the Impact of Attentional Momentum Effect on Driver’s Ability of Awareness During Night-time Driving | springerprofessional.de Skip to main content
TOOLBAR 1 2 3 4
SEARCH MENU 1 2 3 4

This study aims to demonstrate that driver’s awareness during driving at night can be improved by attentional momentum effect. Driver’s ability to be aware of pedestrians is often degraded due to the inhibition of return (hereafter, “IOR”). The IOR is the tendency that exogenous attention is suppressed toward the direction to which the driver previously referred. Previous studies have suggested that attentional momentum effect (hereafter, “AME”) can relieve the effect of IOR. For example, IOR phenomenon appears when driver’s exogenous attention is localized on roadside stores with high-illumination intensity. Focusing on the night-time driving, this study investigates the impact through a detection task based on dual-task setting. As a result, it was observed that the target detection was delayed under IOR condition, and the delay in target detection was improved under AME condition. This result supports that attentional momentum effect led to improve the driver’s ability to be aware of objects during night time driving. 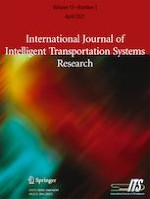 Development of Model for Road Crashes and Identification of Accident Spots