This paper is focused on endowing a mobile robot with topological spatial cognition. We propose an integrated model—where the concept of a ‘place’  is defined as a collection of appearances or locations sharing common perceptual signatures or physical boundaries. In this model, as the robot navigates, places are detected in a systematic manner via monitoring coherency in the incoming visual data while pruning out uninformative or scanty data. Detected places are then either recognized or learned along with mapping as necessary. The novelties of the model are twofold: First, it explicitly incorporates a long-term spatial memory where the knowledge of learned places and their spatial relations are retained in place and map memories respectively. Second, the processing modules operate together so that the robot is able to build its spatial memory in an organized, incremental and unsupervised manner. Thus, the robot’s long-term spatial memory evolves completely on its own while learned knowledge is organized based on appearance-related similarities in a manner that is amenable for higher-level semantic reasoning, As such, the proposed model constitutes a step forward towards having robots that are capable of interacting with their environments in an autonomous manner. 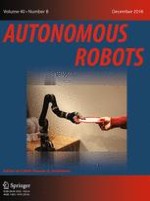