Create an alert for International Journal of Data Science and Analytics now and receive an email for each new issue with an overview and direct links to all articles.

A central theme of network analysis, these days, is the detection of community structure as it offers a coarse-grained view of the network at hand. A more interesting and challenging task in network analysis involves the detection of overlapping community structure due to its wide-spread applications in synthesising and interpreting the data arising from social, biological and other diverse fields. Certain real-world networks possess a large number of nodes whose memberships are spread through multiple groups. This phenomenon called community structure with pervasive overlaps has been addressed partially by the development of a few well-known algorithms. In this paper, we presented an algorithm called Interaction Coefficient-based Local Community Detection (IC-LCD) that not only uncovers the community structures with pervasive overlaps but do so efficiently. The algorithm extracted communities through a local expansion strategy which underlie the notion of interaction coefficient. We evaluated the performance of IC-LCD on different parameters such as speed, accuracy and stability on a number of synthetic and real-world networks, and compared the results with well-known baseline algorithms, namely DEMON, OSLOM, SLPA and COPRA. The results give a clear indication that IC-LCD gives competitive performance with the chosen baseline algorithms in uncovering the community structures with pervasive overlaps. The time complexity of IC-LCD is \(\mathcal {O}(nc_{\max })\), where n is the number of nodes, and \(c_{\max }\) is the maximum size of a community detected in a network.
Advertisement
previous article Learning from word semantics to sentence syntax by graph convolutional networks for aspect-based sentiment analysis
next article A novel approach for discretizing continuous attributes based on tree ensemble and moment matching optimization 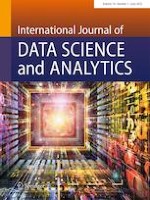