Following WWII, underdeveloped countries tried to achieve high economic growth rates to be more prosperous. According to Solow–Swan, economic growth rate is higher in poor countries than rich ones, implying that it will be more convergent in the long run. This was the initial idea of convergence which was later extended to other domains including price and income distribution.
Justice is defined in Islamic thought as administration and protection of rights against wrongs and oppression and is the golden mean between the extremes of excess and deficiency (Sajjadi 1983, p. 274–275). It is also defined as equality, fairness and impartiality, on the one hand, and balance, moderation, proportionality, and compliance with order, on the other. Justice is a religious and rational conception that provides the basis for evaluation of religions and is a virtue to be realized in an ideal state. Thus, it lies at the heart of religious doctrine by which communal acts are measured to comply with Islamic thought. Economic justice is a major sub-domain of justice that covers social justice as it explains interests, desires, state of existence and competition between individuals within a given society. Distributive justice is an important index of economic justice. It denotes a situation in which too much possession of something by someone leads to deprivation of another of the same thing. Distributive justice is best applied in allocating rare products, services, resources and goods that directly or indirectly cause conflicting demands. Therefore, it calls for fair distribution of material goods among all social members (Eivazlou 2010, p. 7–12).
Advertisement
Establishing Islamic economic justice has always been the prime objective of Islamic governing system. A principal aspect of Islamic justice in economics is distribution of income, which means fair allocation of income to families within a society or between countries. Local distribution of income to realize justice and promote effectiveness is also important.
Islamic countries host a major part of world population. An analysis of income distribution and its related transformations in these communities contributes to determining its status and promoting distributive justice. It is imperative to identify communities with unfair distribution in order to establish policies to achieve a more balanced distribution. In addition to having a fair income distribution system, it is expected that Islamic countries adopt a more long-term convergent approach towards distribution. In other words, communities that score low at growth rate of income distribution index should try in the long run to achieve mean growth rate. Gini coefficient is used for analyzing income distribution. Albu ( 2012) studied convergence of Gini coefficient in EU countries during 2000–2011 and found an accentuated convergence inside the EU-10 group, but a significant divergence inside EU-15. Similarly, Chambers and Dhongde ( 2016) studied convergence of Gini coefficient in some countries and reported positive results. Thus, considering the gap in the literature and lack of studies on Islamic countries, the present study examines convergence of income distribution as an index of economic justice in selected Islamic countries (Albania, Bangladesh, Azerbaijan, Egypt, Guinea, Iran, Iraq, Jordan, Kazakhstan, Kosovo, Kyrgyzstan, Malaysia, Maldives, Niger, Pakistan, Senegal, Tajikistan, Turkey, Yemen and Tunisia) during 1995–2015 using beta-type convergence and generalized method of moment.
The rest of the paper is structured as follows. Section 2 provides the review of the literature. Section 3 deals with research methodology. Section 4 is the analysis of results. Finally, concluding remarks and suggestions are given in Sect. 5.

The present study analyzes convergence of income distribution as an index of Islamic justice in selected Islamic countries (Albania, Bangladesh, Azerbaijan, Egypt, Guinea, Iran, Iraq, Jordan, Kazakhstan, Kosovo, Kyrgyzstan, Malaysia, Maldives, Niger, Pakistan, Senegal, Tajikistan, Turkey, Yemen And Tunisia) during 1995–2015 using absolute β convergence. Data were obtained from World Data Bank.
$${ \log }\left( {\frac{{y_{i, t} }}{{y_{i, t - 1} }}} \right) = a - \beta \;\log \left( {y_{i, t} } \right) + u_{i, 1} ,$$
(1)
where y i,t denotes difference of each country’s Gini coefficient from the mean in year t; y i,t−1 denotes i country’s Gini coefficient from the mean in year-1. Positive β coefficient implies an inverted relationship between initial state and mean growth rate. That is to say, countries with low Gini coefficient move at a higher rate than other countries towards middle point. On the other hand, negative β coefficient denotes divergence. β convergence coefficient shows rate of convergence.
Conditional beta convergence includes control variables and is determined by:
$${ \log }\left( {\frac{{y_{i, 1} }}{{y_{i, 0} }}} \right) = a - \beta \;\log \left( {y_{i, 0} } \right) + \sum \gamma x_{i, 1} + u_{i, 1} ,$$
(2)
where y i,t is the difference in each country’s Gini coefficient from total Gini coefficient in year t. y i,t−1 is the difference in country ith Gini coefficient from total Gini coefficient of all countries in year t − 1. Control variables are inflation rate, and GDP per capita. Inflation rate is calculated from consumer price index.
The important thing in estimating panel data is whether specific effects are fixed or random. The principal assumption is that panel data models are random effects independent from explanatory variables. Nevertheless, this assumption is rejected and it is inappropriate to use random effects in estimation. The relationship between specific effects and explanatory variables in fixed effects method is not problematic. But fixed effects method has a dynamic structure and yields inconsistent estimations (Arellano 1993; Arellano and Bond 1991).
Since the explanatory variable is endogenous and the model has a dynamic structure, generalized method of moment is used here because it uses variable lag to remove endogenous bias.
Before performing convergence test, we need to provide income distribution in the countries under study. Table  1 gives descriptive statistics of Gini coefficient (low, mean, high) as an index of income distribution and Islamic justice.
Table 1
Descriptive statistics of Gini coefficient during 1995–2015.
Source: research findings
As can be seen, Kyrgyzstan and Maldives score the highest (49) while Azerbaijan scores the lowest (16) Gini coefficient. Moreover, Albania and Kosovo show equal income distribution while in Malaysia the Gini coefficient is 47, implying high inequality of income distribution (Table  2).
Table 2
Descriptive statistics of income per capita during 1995–2015.
Source: research findings
Descriptive statistics of income per capita for countries under study are given below (Table  2).
The table shows that Malaysia and Tajikistan, respectively, have maximum and minimum pe capita income.

Given the importance of fair distribution as a measure of Islamic economic justice and equal distribution of income in Islamic countries, the present study investigated economic convergence of Islamic justice in selected Islamic countries (Albania, Bangladesh, Azerbaijan, Egypt, Guinea, Iran, Iraq, Jordan, Kazakhstan, Kosovo, Kyrgyzstan, Malaysia, Maldives, Niger, Pakistan, Senegal, Tajikistan, Turkey, Yemen And Tunisia) during 1995–2015 using generalized method of moment and Stata 13 software. Our results indicated that income distribution in 20 countries under study was convergent at the rate of 0.31 and was significant at 1%. Results of conditional beta convergence implied convergence of Gini coefficient in these countries. Inflation rate and per capita GDP had positive effects on Gini coefficient.

The present study investigated economic convergence of Islamic justice in selected Islamic countries during 1995–2015 using generalized method of moment and Stata 13 software. Our results indicated that income was convergent at the rate of 0.31. Results of the present study were in agreement with findings of similar studies. For example, Albu ( 2012) studied convergence of Gini coefficient in EU countries during 2000–2011 and reported convergence in control group and divergence in experimental group. Similarly, Chambers and Dhongde ( 2016) studied convergence of Gini coefficient in some countries and reported that they were convergent. It is suggested that Organization of Islamic Countries develop proportionate plans and policies to optimize efficiency of assets of poorer economies, e.g., through access to complementary assets. Moreover, price adjustment policies can help promote efficiency and improve income distribution in divergent regions. Thereby, prices in divergent regions decline and inequality significantly drops in the long run, leading finally to a more convergent income distribution. Optimal use of capital in income distribution in divergent regions may have positive effects on achieving convergence. Countries which suffer from inequality are suggested to formulate plans for economic, social and local development and allocate financial resources to increase job opportunities. Financial moderators, like increasing retirement pensions and unemployment insurance in times of high inflation, may help curve the gap in distribution. Increasing direct tax from total tax in divergent countries, where the ratio of tax income to GDP is low, is also helpful. This way, the government can optimally use taxes from high-income entities to redistribute income and drive the low Gini coefficient upwards.

In the present study, no organization has been used, therefore it is not necessary to thank any organization or individual.

The author declares no competing interests.
Open AccessThis article is licensed under a Creative Commons Attribution 4.0 International License, which permits use, sharing, adaptation, distribution and reproduction in any medium or format, as long as you give appropriate credit to the original author(s) and the source, provide a link to the Creative Commons licence, and indicate if changes were made. The images or other third party material in this article are included in the article's Creative Commons licence, unless indicated otherwise in a credit line to the material. If material is not included in the article's Creative Commons licence and your intended use is not permitted by statutory regulation or exceeds the permitted use, you will need to obtain permission directly from the copyright holder. To view a copy of this licence, visit http://​creativecommons.​org/​licenses/​by/​4.​0/​. 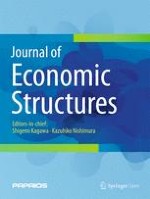 Adding country resolution to EXIOBASE: impacts on land use embodied in trade