We study discrete-time dynamic games with effectively identical players who possess private states that evolve randomly. Players in these games are concerned with their undiscounted sums of period-wise payoffs in the finite-horizon case and discounted sums of stationary period-wise payoffs in the infinite-horizon case. In the general semi-anonymous setting, the other players influence a particular player’s payoffs and state evolutions through the joint state–action distributions that they form. When dealing with large finite games, we find it profitable to exploit symmetric mixed equilibria of a reduced feedback type for the corresponding nonatomic games (NGs). These equilibria, when continuous in a certain probabilistic sense, can be used to achieve near-equilibrium performances when there are a large but finite number of players. We focus on the case where independently generated shocks drive random actions and state transitions. The NG equilibria we consider are random state-to-action maps that pay no attention to players’ external environments. Yet, they can be adopted for a variety of real situations where the knowledge about the other players can be incomplete. Results concerning finite horizons also form the basis of a link between an NG’s stationary equilibrium and good stationary profiles for large finite games.
Advertisement
previous article Costly Participation and The Evolution of Cooperation in the Repeated Public Goods Game 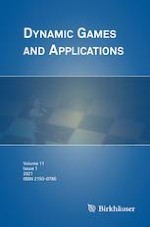 A Differential Game Model of Opinion Dynamics: Accord and Discord as Nash Equilibria