This article is devoted to a phenomenological analysis and interpretation of the basic concepts involved in phenomenology. The first concept that deserves our attention is that of “apodicticity” along with the related concept of “apodictic evidence”. The next concept is that of “correlation,” which manifests its apodictic character in bringing together all transcendental facts. With the transition from traditional discourses to modern discourse, the concept of apodicticity continues to deepen; at the same time, it is accepted that some metaphysical presuppositions continue to lurk at the foundation of this concept. Apodicticity, as the principle of knowledge, is an idea that lies in the infinity of universal experience, which includes both agreed and mismatched moments. This mismatch, in turn, refers to correlative connections between the transcendental Ego, the world and intersubjectivity. Transcendental subjectivity has a correlative nature, which is due to its self-transcending character, resulting in gaps and distinctions being found within subjectivity. 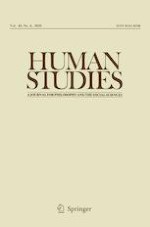 Hans Ruin: Being with the Dead—Burial, ancestral politics, and the roots of historical consciousness

When Body Image Takes over the Body Schema: The Case of Frantz Fanon

The Significance of Mobility in Alfred Schutz’s Theory of Action

The Mundane Dialectic of Enlightenment: Typification as Everyday Identity Thinking