Create an alert for International Journal on Interactive Design and Manufacturing (IJIDeM) now and receive an email for each new issue with an overview and direct links to all articles.

Vehicles fuel consumption under real-world conditions can be up to 60% higher than reported by vehicle manufacturers. One of the most influential factors in this discrepancy is the use of Air conditioning (A/C). However, the study of the contribution of A/C to fuel consumption and emissions has been limited to laboratory tests. This study aims to determine A/C impact on the real fuel consumption in light-duty vehicles. For this purpose, light-duty passenger vehicles were monitored under their normal driving conditions in a 5-month campaign. We obtained, second by second, simultaneous measurements of the vehicle's fuel consumption, speed, position, engine speed and load, and the A/C operational state (on/off). The results obtained showed that the added Specific Fuel Consumption (SFC, L/100 km) due to the A/C peaked at low vehicle speeds (< 10 km/h) with values up to 17.6 L/100 km. This increment reduces with vehicle speed, being (on average) 8.2 L/100 km for low speeds (< 50 km/h) and 1.3 L/100 km for higher speeds. However, when observing this increment in terms of fuel consumption rate, those differences remained approximately constant at 0.9 L/h. Results showed that the SFC metric is naturally influenced by the vehicle’s speed, hiding the real effect of the A/C fuel consumption. Therefore, we suggested to report the A/C added fuel consumption using the fuel consumption rate metric, which showed no clear relationship with vehicle speed. Additionally, we found that the A/C added load to the engine forces it to operate in regions of better efficiencies.
Advertisement

Title
Assessment of the effect of using air conditioning on the vehicle's real fuel consumption
Authors
A. E. Mogro
J. I. Huertas 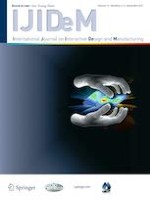 Implementation of the challenge-based learning approach in Academic Engineering Programs