Create an alert for The Computer Games Journal now and receive an email for each new issue with an overview and direct links to all articles.

» View full text Download PDF-version
Important notes
All editorial decisions for this article, including selection of reviewers and the final decision, were made by guest editor Dr. Kenny McAlpline. 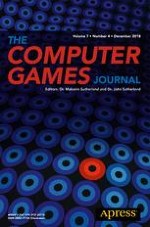