Back to the search result list
​
print
Table of Contents
​
insite
Issue archive
​
archive
​
insite
Print
​
print
​
share
previous article Sustainability Beyond Instrumentality: Towards ...
next article In Adam Smith’s Own Words: The Role of Virtues ...

Despite sharing Catholic Social Teaching (CST) as their system of morals and both being confronted with marketisation pressures, working conditions at German and Belgian Catholic social service providers (CSSPs) of elderly care differ. We argue that an interdisciplinary approach is needed to understand such differences, as interpretation of CST is mediated by local contexts. Working conditions result from interactions shaped by each country’s respective religious, legal and socio-economic contexts, providing players with different levels of discretion and power resources. In Belgium, working conditions at Catholic elderly care providers tend to be better due to a strong Catholic trade union, encompassing labour market regulation and a universal legal system applying to all care providers. Moreover, there is strong interaction between these Catholic care providers and other Catholic institutions (“pillarisation”). By contrast, German CSSPs, operating as faith-based organisations with their own legal framework in a relatively liberalised and decentralised labour market, are able to use various flexibility practices which put pressure on working conditions. Using such practices is partially justified by the Catholic discourse on charity and altruism, stressing the particular nature of work in the Catholic care sector. Overall, the article demonstrates differences in the local application of CST. It also shows how transnational differences in working conditions at Catholic social service providers are the product of more than just local differences in the interpretation and application of CST principles, being shaped by interactions between a country’s specific religious, legal and socio-economic contexts. 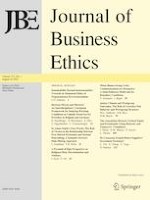 A Pyramid of Hate Perspective on Religious Bias, Discrimination and Violence

In Adam Smith’s Own Words: The Role of Virtues in the Relationship Between Free Market Economies and Societal Flourishing, A Semantic Network Data-Mining Approach

When Blame-Giving Crisis Communications are Persuasive: A Dual-Influence Model and Its Boundary Conditions