Finding avenues for collaboration and engagement between the arts and the sciences (natural and social) was a central theme of investigation for the Responsible Research and Innovation (RRI) and Public Engagement programme at BrisSynBio, a BBSRC/EPSRC Synthetic Biology Research Centre that is now part of the Bristol BioDesign Institute at University of Bristol (UK). The reflections and experiments that appear in this dossier are a sample of these investigations and are contributed by Maria Fannin, Katy Connor and David Roden. Darian Meacham coordinated and introduces the dossier.
Disclaimer

Finding avenues for collaboration and engagement between the arts and the sciences (natural and social) was a central theme of investigation for the Responsible Research and Innovation (RRI) and Public Engagement programme1 at BrisSynBio, a BBSRC/EPSRC Synthetic Biology Research Centre that is now part of the Bristol BioDesign Institute at the University of Bristol (UK). The reflections and experiments that appear in this dossier are a small sample of these investigations. From the Centre’s inception in 2013, the thinking was that engagement with the arts would be a stimulant for discussion and mutual learning with various publics, practitioners and researchers from various disciplines and that it would allow researchers within synthetic biology, and more specifically BrisSynBio itself, to rethink or reimagine questions and ways of asking questions about the scientific and socio-economic enterprise that they were engaged in. These included questions about how that enterprise appeared to those outside of its day-to-day activities as well as how the encounter with questions about aesthetic judgement and artistic practices could transform how the enterprise appeared to the researchers working within it; and also how this activity of reimagining through engagement with aesthetic questions might help to build understanding and communication across communities concerning some of the ethical, social, economic and political questions swirling around the Centre and synthetic biology more broadly. Modestly speaking, such engagements could be considered as an attempt at some modicum of greater inclusivity in the public sphere of the republic of science; an acknowledgement of Sheila Jasanoff’s assertion that “the 20th century’s greatest breakthroughs in the sciences have made it increasingly more acceptable for biologists to claim ownership of the meaning of life [ … ] the origins and implications of that growing primacy deserve our attention” [1]. The theme of art-science collaborations as the basis for “deliberative discussions on research agendas and direction” is taken up by Michael Reinsborough [2] in this issue. A broader analysis of the responsible innovation and public engagement programme at BrisSynBio can be found in Pansera et al. [3].
Attempts at mutual-learning through aesthetic engagement came quite naturally—so to speak—to the Centre. This was due to several factors. First, synthetic biology, a field born of knowledge and material co-production between biology, chemistry, engineering and computer science, has constant translation between disciplines built into it. The attempts at translation and its failure that are part and parcel of aesthetic engagement with the natural and social sciences are also integral to synthetic biology itself. Second, as Massimiliano Simons [4] points out, the history of engineering is replete with the self-understanding of engineers as close to the arts and enacting the character of Metis, goddess of magical cunning, who somehow tricks nature, hence the affinity between synthetic biology and design thinking (e.g. protein design). Third, the Centre for Public Engagement at University of Bristol was a partner in BrisSynBio. This added not only a great depth of experience in public engagement activities and methodologies to the Centre’s expertise but also opened possibilities for local and international collaborations, including through European Framework Programme projects, e.g. SYNENERGENE.2 A fourth factor is offered by the city of Bristol itself, with its vibrant arts and music scene. As expressed in its logo, designed by a local artist, BrisSynBio saw itself as embedded in the city and its artistic/design traditions (Fig. 1).
×
Advertisement
Thus, the impetus for engagement with the city’s artists as a form of public and deliberative engagement was understood as part of the civic mission and role of the Centre.
The three pieces that make up this dossier form a constellation around the project “Blood Culture: reimag(in)ing life at a cellular scale”:

[Blood Culture: reimag(in)ing life at a cellular scale] explores how artistic research as methodology can bring new insights to the lab-based practices of cell culture and in particular to the practices of culturing red blood cells. It will bring together biochemist Ash Toye from the Bristol Synthetic Biology Research Centre (UoB, BrisSynBio) and researchers in his laboratory; artistic researcher Katy Connor, interested in exploring the boundaries between bodies and technologies; and two social scientists, Maria Fannin (UoB, Geographical Sciences) and Julie Kent (UWE, Bristol/BrisSynBio); to explore how shared interests in blood culture technologies can contribute new conceptual vocabularies and practical insights into Art-Science collaboration. It will therefore enable new perceptual encounters to occur between the four participants: asking how researchers and artists work with ‘lively’ materials like cultured human tissue; exploring novel ways of articulating the cultural, ethical and aesthetic practices involved in culturing blood; and inherent reflections on methodological approaches to ‘making’.3

Maria Fannin’s contribution to this dossier is a reflection on the collaboration and the questions and challenges it presented as emblematic of cross-disciplinary collaboration in synthetic biology, specifically those collaborations involving social scientists, researchers from the humanities and artists. Connor’s piece offers an account of and reflection on the Blood Culture Project. She “argue[s] that the consideration of human bio-matter as an art medium, opens up an intriguing cultural space to critically reflect upon relationships between biology and technology, materiality and ethics, as well as the production of new cultural meanings through metaphor”. Finally, Bristol-based philosopher David Roden uses the encounter with Connor’s work as a catalyst for experimental speculative reflections on synthetic biology, technology and art that sit at the edge of theory fiction.
Advertisement

Disappearance and Assembly (by David Roden)

Funding for Katy Connor’s artist residency came from the Brigstow Institute and BrisSynBio (Bristol BioDesign Institute), University of Bristol, UK. The authors would like to thank Professor Julie Kent (UWE, Bristol emeritus) and Dr. Ash Toye (University of Bristol). Darian Meacham was partially funded by BrisSynBio.
Open Access This article is licensed under a Creative Commons Attribution 4.0 International License, which permits use, sharing, adaptation, distribution and reproduction in any medium or format, as long as you give appropriate credit to the original author(s) and the source, provide a link to the Creative Commons licence, and indicate if changes were made. The images or other third party material in this article are included in the article's Creative Commons licence, unless indicated otherwise in a credit line to the material. If material is not included in the article's Creative Commons licence and your intended use is not permitted by statutory regulation or exceeds the permitted use, you will need to obtain permission directly from the copyright holder. To view a copy of this licence, visit http://​creativecommons.​org/​licenses/​by/​4.​0/​. 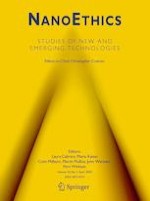