The study area of this article, Western Jilin province of China, was a typical area responding to global changing in middle latitude areas. In this paper, by interpreting the thematic mapper (TM) images of the study area in the years of 1989, 1996, 2000 and 2004, the land use/cover change (LUCC) data were achieved, which included the area of paddy fields and its spatial distributions. 113 soil samples were collected to obtain soil organic carbon (SOC) data of different land use types. After that, the organic matter contents of these samples were measured by using the potassium dichromate oxidation-outer heating method. Based on the data above, the amount of SOC sequestrated by the surface soil (0~30 cm) of paddy fields was calculated. The result showed that: the area of paddy fields was increasing continuously in western Jilin, from 11.28 × 104 hm2 in 1989 to 22.77 × 104 hm2 in 2004. Paddy fields transferred from wetlands, grasslands and water areas accounted for the main part of the paddy fields in 2004, the areas were 3.09 × 104 hm2, 2.98 × 104 hm2 and 2.8 × 104 hm2, respectively. And paddy fields with a total area of 0.83 × 104 hm2 degraded into saline-alkali lands. The amount of organic carbon sequestration in the surface layer (0–30 cm) of paddy fields was 658.86 × 104 t. The primary SOC sinks located around the joint of Baicheng City and Zhenlai County, while the major SOC source located at Songyuan City and northern Qianguo County. 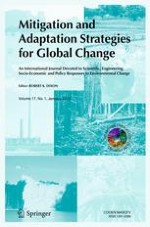 Co-benefits of a carbon tax in Nepal

Mitigation of climate change impacts on maize productivity in northeast of Iran: a simulation study