The article provides a historical and conceptual overview of censorship, one of the foundational institutions of the Soviet state. Censorship was institutionalized in 1917 and expanded into “omincensorship,” a system which encompassed not only newspapers and philosophical works but also children’s literature, religious writings, and all manner of foreign publications. As a result of extensive surveillance and harsh punishment, self-censorship became an unwritten rule for self-preservation.
Advertisement
previous article A Testimony of the Great Terror Preface to the Italian Edition of Yulia Pyatnitskaya, Diary of a Bolshevik’s Wife
next article Kei Hiruta, Hannah Arendt and Isaiah Berlin: Freedom, Politics and Humanity 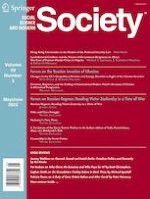 Brett Christophers, Who Owns the Economy and Who Pays for It?

Peter Hennessy, A Duty of Care: Britain Before and After Covid

A Testimony of the Great Terror Preface to the Italian Edition of Yulia Pyatnitskaya, Diary of a Bolshevik’s Wife