Chains connecting two or more different clusters are a well known problem of clustering algorithms like DBSCAN or Single Linkage Clustering. Since already a small number of points resulting from, e. g., noise can form such a chain and build a bridge between different clusters, it can happen that the results of the clustering algorithm are distorted: several disparate clusters get merged into one. This single-link effect is rather known but to the best of our knowledge there are no satisfying solutions which extract those chains, yet. We present a new algorithm detecting not only straight chains between clusters, but also bent and noisy ones. Users are able to choose between eliminating one dimensional and higher dimensional chains connecting clusters to receive the underlying cluster structure. Also, the desired straightness can be set by the user. As this paper is an extension of [8], we apply our technique not only in combination with DBSCAN but also with single link hierarchical clustering. On a real world dataset containing traffic accidents in Great Britain we were able to detect chains emerging from streets between cities and villages, which led to clusters composed of diverse villages. Additionally, we analyzed the robustness regarding the variance of chains in synthetic experiments. 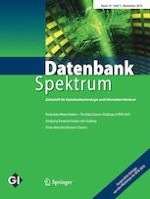