» Get access to the full-text
Important notes
Communicated by Angus Jackson.

The online version of this article (https://​doi.​org/​10.​1007/​s10531-018-1610-2) contains supplementary material, which is available to authorized users.
This article belongs to the Topical Collection: Biodiversity exploitation and use.

Exploitation for trade is one of the biggest threats to many species, especially for marine fishes. Trade regulations should, therefore, be effective in helping conserve marine fish populations. The Convention of International Trade in Endangered Species of Wild Fauna and Flora (CITES), one of the few multilateral environmental agreements with enforcement capacity, has embraced a number of marine fishes in recent years. However, the impacts of such measures on wildlife trade have rarely been assessed. We conducted a case study of the dried seahorse (Hippocampus spp.) trade in Thailand to understand the trade of these species under CITES regulations. We carried out 203 semi-structured interviews with traders to estimate the economic scale of Thai seahorse trade, and compared perceived changes with official trade datasets. Even though most seahorses were incidentally caught, we estimated that dried seahorses could be worth US$26.5 million per year for Thai fishers. However, the total declared annual export value was only around US$5.5 million, and had decreased to US$1 million in 2013. Considering the economic value of seahorses, the large discrepancy between declared export volumes and catch estimates suggested that trade may be underreported. While official data shows the export volume decreased after the implementation of CITES listing in 2005, our respondents did not report a similar trend. In contrast, the prices of seahorses were reported to be increasing. Our study highlights the economic importance of marine fishes captured as bycatch and the importance of international and domestic management measures for the trade of bycatch species. 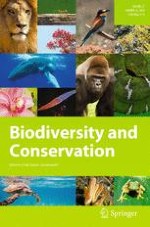 The same old mistakes in aquaculture: the newly-available striped catfish Pangasianodon hypophthalmus is on its way to putting Brazilian freshwater ecosystems at risk

Distribution, population density and conservation of the critically endangered brown spider monkey (Ateles hybridus) and other primates of the inter-Andean forests of Colombia

Conservation of severely fragmented populations: lessons from the transformation of uncoordinated reintroductions of cheetahs (Acinonyx jubatus) into a managed metapopulation with self-sustained growth

The primate extinction crisis in China: immediate challenges and a way forward