Create an alert for Fire Technology now and receive an email for each new issue with an overview and direct links to all articles.

Thermal runaway of lithium-ion batteries is particularly dangerous in systems where runaway can propagate through many cells. To understand thermal runaway propagation in these systems, it is important to understand the differences between failure characteristics of the initial cell that fails due to an abuse event and subsequent cells that fail due to thermal runaway propagation. This work compares thermal runaway events for single cells failed using a heater with cells failed due to propagation in an array. Most of the tests were conducted in an inert environment within a pressure vessel. Cell clamping stress, vessel gas pressure and temperature data show that runaway in cells within an array traverses the cells more slowly and releases gas at a slower rate than singly failed cells. For heater-initiated cell failure, post-experiment cell teardowns suggest that thermal runaway originates at a single point and creates a gas flow stream that causes heavy damage and exits from one side of the cell. Teardowns of cells which failed due to array propagation show more uniform damage and gas release from a larger area.
Advertisement
previous article Modeling of Thermal Runaway Propagation in a Pouch Cell Stack
next article Thermal-Runaway Propagation over a Linear Cylindrical Battery Module 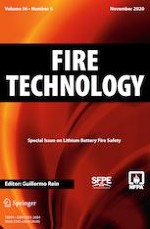