» Get access to the full-text
Important notes
This article is a part of the Topical Collection in Environmental Earth Sciences on “Advances in Environmental Geochemistry” guest edited by Dr. Eleanor Carol, Dr. Lucia Santucci and Dr. Lia Botto.

The watershed of El Pescado Creek has been established as a protected landscape; however, it is currently exposed to an intense land use and coverage change process, based on the conversion of grassland areas into greenhouse horticulture and urbanized areas. The aim of this work was to analyze hydrochemical modifications in this changing scenario, to identify parameter variations associated to water balance. The monitory network included surface water and groundwater samplings during winter, spring and summer of 2017. Daily water balance was estimated throughout the annual cycle. Electrical conductivity and pH were determined together with major ions (Na+, K+, Mg2+, Ca2+, CO32−, HCO3−, Cl−, SO42− and NO3−). The analysis of water stable isotopes (δ18O and δ2H) was performed for one sampling date. Water-balance variations during short-term periods affected surface water chemistry, although no relevant influence on deep groundwater was registered. Major ions variation in the surface water of the upper watershed might be related to runoff alteration caused by recently established impervious cover and by the dynamic of groundwater inputs. Isotopic analysis of surface water shows deviation from local meteoric line, with an isotopic enrichment following a tendency associated to evaporation processes. Deep groundwater samples express a recharge process by rainfall infiltration, with little or no previous evaporation (deuterium amounts were similar to those corresponding to local rainfall). Incipient evaporation processes are registered for shallow groundwater, possibly occurring before infiltration in the non-saturated zone, or right from the phreatic, when it is near the surface. 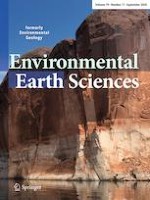