Multiple risks have been building up in the Chinese economy during the past decade, exposing it to a possible financial crisis of increasing likelihood. Based upon the inductive reasoning from the conventional key indicators discussed by economists, this paper also adds a deductive reasoning by examining the incentive structure for key players in the Chinese political economy to gauge the risk of a financial crisis in China. It highlights the political and structural factors that are responsible for soft budget constraint, moral hazard from major players, and the lack of institutional foundation for sovereign credibility. It argues that recent policies have not only failed to address these issues but instead have further damaged the credible commitment of the state to the market economy and ratcheted up the course of a great meltdown. This paper calls for a fundamental institutional change in China’s political economy in order to prevent perversion in the state-market interaction from spawning both political and economic crises. 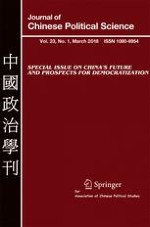 Huisheng Shou, Globalization and Welfare Restructuring in China: The Authoritarianism that Listens?