Most of the recent research works on comic document images have focused on the reading and distribution of comics digitally due to the evolution of technologies. In this work, the extraction of narrative text boxes and speech balloons, which contain the conversations among comic characters along with their feelings, is presented. Due to the huge variety of drawing styles, the shape of these speech balloons is complex, and extraction is difficult. We present a shape-aware dual-stream convolutional neural network for the segmentation of narrative text boxes and speech balloons of various shapes. In our dual-stream architecture, an added shape module processes edge information of the speech balloons and narrative texts with the main module. Later, the concatenation of these two modules produces more accurate segmentation of speech balloons and narrative text boxes. The proposed method achieves significant performance improvements in terms of both region accuracy (mIOU) and boundary accuracy (F-measure and Hausdorff distance) compared to other state-of-the-art methods on various publicly available comic datasets (namely eBDtheque, DCM and Manga 109 dataset subset) in different languages. In addition, we have developed a new dataset (BCBId) for comics in Bangla, the eighth most spoken language in the world, and propose a method for the development of ground-truth images in a semiautomatic way. 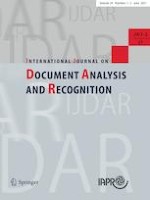 Deep learning for graphics recognition: document understanding and beyond