This paper examines the mediating role of two emergent team states—collective regulatory focus (CRF) and team initiative—for transmitting the effects of transformational and transactional leadership and team members’ chronic-regulatory focus on team creative performance. We conducted two studies. An experimental team-level study of 54 teams (n = 157) and a survey study conducted among employees who work in teams (n = 141). Team-level analysis of study 1 reveals that CRF and team initiative mediate the effect of leadership and team members’ chronic regulatory focus on creative performance. In addition, collective promotion moderates the negative effects of collective prevention on both team initiative and creativity. Study 2 confirms the relationships between leadership styles, team CRF, and team initiative with employees at the individual level. Understanding the collective mechanisms that enable transformational leadership to foster team creativity contributes to the ability of organizations and managers to increase the creativity of team production by influencing team dynamics. This study expands our knowledge on leader–follower dynamics at the team level and on the ability of these dynamics to shape team creativity. It also expands our knowledge on the emergence of regulatory focus at the team-level and its potential antecedents.

previous article Making Things Happen (Un)Expectedly: Interactive Effects of Age, Gender, and Motives on Evaluations of Proactive Behavior
next article When do job-insecure employees keep performing well? The buffering roles of help and prosocial motivation in the relationship between job insecurity, work engagement, and job performance

The scripts involved different languages, mottos, and messages across the transactional and transformational conditions. For example, in the transformational sessions, the manager presented his vision and aspirations about the expected outcomes from the interaction with the students, explained the importance and significance of the task with inspirational messages, and expressed his belief in the ability of the students to perform the task successfully. During the performance stage, the manager delivered transformational messages to the participants (e.g., “Each one of you will be able to express his/her personal abilities.”). In the transactional sessions, the manager showed a businesslike attitude, presented the interaction with the students as a “deal,” in which both sides had something to gain, explained the importance of performing the task according to the rules, and noted that he would supervise and monitor the students’ work to make sure they performed it correctly. During the performance stage, the manager delivered transactional messages to the participants (e.g., “Follow the rules, avoid deviation from the instructions, and keep on schedule.”).

No substantive differences in the parameter estimates emerged when testing the model outside of SEM using ordinary least squares regression. We decided to test our hypotheses using path analysis because it provides the best omnibus testing of our theorizing.

To remedy any over-multicollinearity, we re-ran our models assessing the variance inflation factor (VIF) scores for each variable (in SPSS because VIF statistics are not available in MPlus). These scores indicate quantitatively the extent to which multicollinearity may be a concern. A typical rule of thumb is that scores over 10 as a general rule, or 5 as a conservative estimate, indicate that multicollinearity is a potential problem. VIF statistics for each of our parameters were all less than 2, suggesting that this was not a problem in our dataset.

The results of a supplemental analysis including dispersion in team chronic promotion focus as a predictor of promotion CRF (β = .09, SE = .14, p = .54) and dispersion in team chronic prevention as a predictor of prevention CRF (β = .14, SE = .13, p = .28) revealed no significant associations. Moreover, the results of all hypothesis tests held in this analysis.

Because these models are not nested, we followed the procedure recommended by Hooper, Coughlan, and Mullen (2008), Kline (2011), and Wang and Chan (2011), which suggests comparing the Akaike information criterion (AIC) and the Bayesian information criterion (BIC) (for similar examples of testing reverse causality using AIC and BIC, see Jin, Seo, & Shapiro, 2016; Matta, Scott, Colquitt, Koopman, & Passantino, 2017; Qu, Janssen, & Shi, 2015). The results of these comparisons revealed that the hypothesized model (AIC = 281.47, BIC = 311.74) had lower AIC and BIC than the reverse causal model (AIC = 286.41, BIC = 316.68), demonstrating that the hypothesized model provided superior fit to the data and is the model most likely to replicate (Kline, 2011). Finally, we also tested whether the two antecedents of CRF, leadership and chronic-regulatory focus, interact in their effect on CRF. We did not find any interaction effect between them. 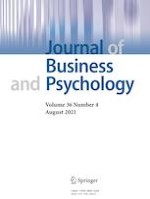 Should We Agree to Disagree? The Multilevel Moderated Relationship Between Safety Climate Strength And Individual Safety Motivation