Lechuga and Murillo showed that a non-oriented, simple, connected, finite graph G is k-colourable if and only if a certain pure Sullivan algebra associated to G and k is not elliptic. In this paper, we extend this result to simplicial complexes by means of several notions of colourings of these objects.
Disclaimer

Graph Theory and Rational Homotopy Theory were first related by Lechuga and Murillo in a celebrated paper [15] (see also [16]) where they show that a non-oriented, simple, connected, finite graph can be k-coloured, \(k\ge 2\), if and only if a certain Sullivan algebra associated to the graph is not elliptic. They also provide a link between Rational Homotopy Theory and algorithmic complexity by proving that the problem of graph colourability can be reduced in polynomial time to the problem of determining the ellipticity of a certain Sullivan algebra. Hence, since the former is an NP-complete problem, the latter is an NP-hard problem.
This interplay between Graph Theory and Rational Homotopy Theory has been proven fruitful: recently, Costoya and Viruel were able to use this interaction to solve a question of realisability of groups [4, 5], and applications of these results to further problems were subsequently found [2, 3].
Advertisement
The aim of this work is to extend the result of Lechuga and Murillo from graphs to (finite) simplicial complexes by considering eleven notions of colourability for these objects, many of which can be found in the literature. We refer to these colourings as \({\mathfrak {C}}_i\)-colouring, for \(i=1,2, \ldots , 11\) (see Definitions 2.1, 2.4, 2.6, and 3.3), and prove the following two results:
Theorem 1.1
For any \(k\ge 2\), any \(i=1,2,\ldots ,11\), and any connected simplicial complex X, which is assumed to be strongly connected and homogeneous for \(i = 8,9,10,11\), there exists a pure Sullivan algebra \({{\mathcal {M}}}^i_k (X)\) which is not elliptic if and only if X is \({\mathfrak {C}}_i\)-k-colourable.
Theorem 1.2
For \(i\in \{1,7,8,9,10,11\}\) and \(k\ge 3\), or for \(i\in \{4,5,6\}\) and \(k\ge 4\), determining if a connected simplicial complex is \({\mathfrak {C}}_i\)-k-colourable is an NP-hard problem.
We point out that closely related problems have been studied in [6, 8, 14].
Advertisement
As for the necessary background, we assume that the reader is familiar with basics of algorithmic complexity and Rational Homotopy Theory, for which [12] and [9] are, respectively, excellent references. In particular, concerning algorithmic complexity we will use that the problems of total-k-colourability, \(k\ge 4\), edge-k-colourability, \(k\ge 3\), and k-colourability, \(k\ge 3\), are NP-complete [13, 17, 18].
Regarding Rational Homotopy Theory, we just recall that a (simply connected) Sullivan algebra, denoted \((\Lambda W,d)\), is a commutative differential graded algebra, which is free as an algebra generated by the (simply connected) graded rational vector space W, and where the differential d is decomposable. A Sullivan algebra is elliptic if both W and \(H^*(\Lambda W,d)\) are finite dimensional, and pure if \(d W^{\mathrm{even}}=0\) and \(d W^{\mathrm{odd}}\subset \Lambda W^{\mathrm{even}}\).
We now recall the fundamental construction in [15] associated to any \(k\ge 2\) and any non-oriented, simple, connected, finite graph \(G = (V,E)\), where V and E respectively denote the sets of vertices and edges of G. Consider the pure Sullivan algebra \(S_k(G) =(\Lambda W_{G,k},d)\) where
$$\begin{aligned} W_{G,k}^{\mathrm{even}}&= \langle x_v \mid v\in V \rangle , \quad |x_v|=2, \quad d(x_v)=0, \\ W_{G,k}^{\mathrm{odd}}&= \langle y_{(u, v)} \mid (u, v)\in E\rangle , \quad |y_{(u, v)}| = 2k-3, \quad d(y_{(u, v)}) = \Sigma _{l=1}^k x_u^{k-l}x_v^{l-1}. \end{aligned}$$
For this construction, the following holds:
Theorem 1.3
([15, Theorem 3]) The graph G is k-colourable if and only if the Sullivan algebra \(S_k(G)\) is not elliptic.
To relate this result with algorithmic complexity it is convenient to keep in mind that a graph \(G = (V,E)\) is usually encoded by its adjacency matrix \(A=(a_{ij})_{i,j\in V}\) in which \(a_{ij}=1\) if \((i, j)\in E\) and \(a_{ij}=0\) otherwise. In binary, the codification of this matrix has length \(\log _2 n+n^2\), where n is the number of vertices of G.
Throughout this paper, every considered simplicial complex X is assumed to be finite. The dimension of a simplex \(\sigma \in X\), denoted \(\dim \sigma\), is its cardinality minus one. The dimension of X, denoted \(\dim X\), is the dimension of any of its largest simplices. Given \(s\ge 0\), we denote the set of simplices of X of dimension s by \(X^s\). In particular, \(X^0\) is the set of vertices of X, which is often denoted by V. The s-skeleton of X is the subsimplicial complex of X spanned by \(X^s\), and we denote it by \(X^{(s)}\). Note that \(X^{(1)}\) is trivially identified to a non-oriented, simple graph, and we say that X is connected if \(X^{(1)}\) is a connected graph.

The author is thankful to Carballés, Costoya and Viruel for their insightful comments and guidance. The author is also thankful to the referee, whose comments helped improve the presentation of this work.
Open AccessThis article is licensed under a Creative Commons Attribution 4.0 International License, which permits use, sharing, adaptation, distribution and reproduction in any medium or format, as long as you give appropriate credit to the original author(s) and the source, provide a link to the Creative Commons licence, and indicate if changes were made. The images or other third party material in this article are included in the article's Creative Commons licence, unless indicated otherwise in a credit line to the material. If material is not included in the article's Creative Commons licence and your intended use is not permitted by statutory regulation or exceeds the permitted use, you will need to obtain permission directly from the copyright holder. To view a copy of this licence, visit http://​creativecommons.​org/​licenses/​by/​4.​0/​. 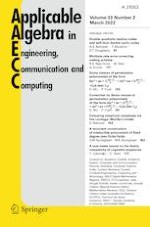 A new lower bound on the family complexity of Legendre sequences

Correction to: Some classes of permutation polynomials of the form over

Some classes of permutation polynomials of the form over