Commentary Celebrating the Centenary of Rawls’s Birth and the 50th Anniversary of A Theory of Justice | springerprofessional.de Skip to main content
TOOLBAR 1 2 3 4
SEARCH MENU 1 2 3 4

This essay seeks to get a handle on the question of the legacy of John Rawls, one of the most influential political philosophers of the last century. After placing his masterpiece, A Theory of Justice, in its historical and philosophical context, it argues that the enduring significance of Rawls resides more in his demonstration of philosophy’s place in helping us understand politics and less in the particular conception of political morality put forward in his seminal work. The paper concludes by suggesting that, while it is probably still too early to arrive at a reliable verdict about the precise nature of Rawls’s legacy, it is undoubtedly the case that A Theory of Justice remains a landmark in the history of modern political thought.

Title
Commentary Celebrating the Centenary of Rawls’s Birth and the 50th Anniversary of A Theory of Justice
Author:
Johnny Lyons 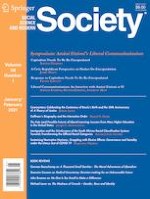 The Fate (and Possible Future) of Liberal Learning: Lessons from Mass Higher Education in the USA

Sustaining Normative Horizons, Grappling with Elusive Effects: Governance and Sociality Under the Litmus Test of COVID-19

Can We Still Re-encapsulate Capitalism?

Liberal Communitarianism: an Interview with Amitai Etzioni at 92

Immigration and the (Ir)relevance of the South African Racial Classification System: Towards Transforming the Official Racial Categories