Beachrock is among the important features of tropical coastlines. It appears to have an anchoring effect on dynamic islands that provides protection from erosion. However, the origin of cement micritic peloidal remains uncertain. Petrographic analysis is a method used by many geologists to accurately identify specific aggregated minerals present in an area. It also helps to understand historical petrogenesis interpretations of a sedimentary rock formation and cementation process inside rock particles. In this study, petrographic analysis was used to identify the structure, texture, composition, and presence of minerals from beachrock samples collected from Okinawa, Japan and Sadranan beach, Yogyakarta, Indonesia. Field investigations and laboratory analysis (petrographic and geochemical measurements) were aimed at understanding the formation mechanism of natural fresh beachrock. Subsequently, laboratory-scale experiments on artificial beachrock were based on solidification tests and were conducted to use microbial-induced calcium carbonate precipitation (MICP) with Pararodhobacter and Ocenisphaera bacterium species to draw comparisons between natural beachrock and artificial beachrock. The cementation process based on petrographic analysis of thin sections has an assumption that the cement type and other added materials determine the strength of the material, and that the cement mineral occurring represents the sedimentary environment. The cement mechanism behavior of natural beachrock has potential in manufacturing artificial beachrock using the MICP method, an eco-friendly development method for coastal areas. 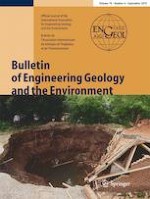 Characterizing the spatial distribution and fundamental controls of landslides in the three gorges reservoir area, China