2.1 Goal and scope of analysis

The aim of this paper is the life cycle assessment of current and future electricity generation systems in the Czech Republic and Poland, taking into account the trend from 2000 to 2050. The most important environmental impact categories have been presented and the main sources of the environmental impact of electricity generation in Poland and the Czech Republic were identified. For comparative purposes, all analyses were referred to the same functional unit. The function of the system was the production of electricity; therefore, the functional unit (FU) was 1 MWhe of obtained electricity. The boundary of the system covered all the technologies included in the individual electricity mix in the countries covered in the analysis. The approach used was “from cradle to gate” (i.e., from cradle to the factory gate).

2.2 Data inventory—electricity generation in the Czech Republic and Poland

3.1 Sensitivity of the results of the assessment of environmental indicators resulting from the selected perspective of impact assessment

Sensitivity analysis to the applied LCA methodology was conducted regarding the prospect of assessing adverse environmental effects resulting from the life cycle of power systems in the Czech Republic and Poland.
In the LCA during the standardization and weighting stages, which needed to be conducted to obtain a single ecoindicator, the subjectivity of results appears. Subjectivity is related to ascribing weights to impacts related to human health, ecosystem damage, and the use of non-renewable resources. These weights were selected by expert method, thus representing the views of the scientific community on what environmental issues are considered more important: the protection of human health, species diversity, or preservation of natural resources for future generations.
There are three groups of weighting factors based on the system of values of three averaged archetypal personalities: individualist/average (I/A: individualist/average), egalitarian (E/A: egalitarian/average), and hierarchist (H/A: hierarchist/average). Hierarchist perspective (H/A), takes into consideration mechanisms, models and the impacts widely accepted in the world. The hierarchists perspective is the result of a compromise between the perspective of individuals and egalitarian attitude. Individualists perspective (I/A) pursue a “business as usual” scenario, accept only those restrictions which have a sound scientific basis, they are society and science oriented, prefer a short-term perspective and non-intervention policy. Egalitarian perspective (E/A) uses long-term perspective. This is characterized by caution, in the case of doubt this takes into account the potential impacts, this does not accept scientific and political organizations advice, nor the attitude that future problems can be avoided. The characteristics of these perspectives were presented previously (Burchart-Korol 2016). The LCA analyses of energy systems in this work were from a hierarchical perspective (H/A). Figure 5 shows the results of the sensitivity analysis of the obtained ReCiPe 2008 indicators according to the adopted assessment perspective: E/A, H/A, I/A.
×
The sensitivity of the obtained results to the evaluation perspective is high. Environmental impact assessed from the egalitarian perspective (E/A) was the highest; in this case, the assessment model takes into account all the factors that potentially contribute to environmental pollution. On the other hand, the environmental assessment from the perspective of the individualist resulted in the lowest environmental impact indicators, because in this case, the assessment model omits all the factors that have not been proven, and assigns less importance to the use of resources, assuming that the problem of resource depletion will be solved in the future owing to new technologies. Although the differences in the results are high, they did not significantly affect the current and future electricity generation systems studied.

This research did not involve human or animal participants. 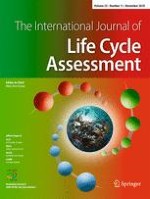 POLICIES AND SUPPORT IN RELATION TO LCA