In this paper, a comparative modelling exercise from the DECOVALEX-2015 project is presented. The exercise is based on in situ experiments, performed at the Tournemire Underground Research Laboratory (URL), run by the IRSN (Institut de Radioprotection et de Sûreté Nucléaire), in France. These experiments aim at identifying conditions (e.g. technical specifications, design, construction, and defects) that will affect the long-term performance of swelling clay-based sealing systems, which is of key importance for the safety of underground nuclear waste disposal facilities. A number of materials are being considered as seals; the current work focusses on a 70/30 MX80 bentonite–sand mixture initially compacted at a dry density of 1.94 Mg/m3. The performance of the sealing plug involves at least three different important components, which are the hydro-mechanical behaviour of the bentonite–sand core, the overall permeability of the surrounding argillite, and the influence of the technological gap between the core and the argillite. Two particular tests have been selected for a comparative modelling exercise: the WT-1 test, which was designed to study the rock mass permeability, and the PT-A1 test, which aimed at quantifying the evolution of the hydro-mechanical field within the bentonite–sand core. A number of independent teams have worked towards modelling these experiments, using different codes and input parameters calibrated on additional small-scale laboratory experiments. Their results are compared and discussed.
Advertisement
previous article Influence of drill mud on the microbial communities of sandstone rocks and well fluids at the Ketzin pilot site for CO2 storage
next article Structure analysis of geopolymers synthesized from clay originated from Serbia 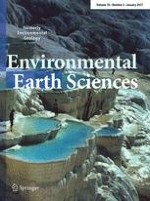 Environmental issues of the Island of Giglio, Tuscan Archipelago, Italy