This paper proposes a novel enhancement for competitive swarm optimizer (CSO) by mutating loser particles (agents) from the swarm to increase the swarm diversity and improve space exploration capability, namely competitive swarm optimizer with mutated agents (CSO-MA). The selection mechanism is carried out so that it does not retard the search if agents are exploring in promising areas. Simulation results show that CSO-MA has a better exploration–exploitation balance than CSO and generally outperforms CSO, which is one of the state-of-the-art metaheuristic algorithms for optimization. We show additionally that it also generally outperforms swarm based types of algorithms and an exemplary and popular non-swarm based algorithm called Cuckoo search, without requiring a lot more CPU time. We apply CSO-MA to find a c-optimal approximate design for a high-dimensional optimal design problem when other swarm algorithms were not able to. As applications, we use the CSO-MA to search various optimal designs for a series of high-dimensional statistical models. The proposed CSO-MA algorithm is a general-purpose optimizing tool and can be directly amended to find other types of optimal designs for nonlinear models, including optimal exact designs under a convex or non-convex criterion. 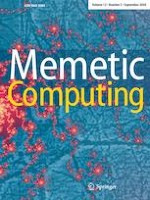