Spacecraft fire safety is an important consideration when designing future exploration missions. Concurrent flow flame spread experiments were carried out aboard the Cygnus spacecraft while in orbit to address current knowledge gaps related to solid fuel combustion in microgravity. The experiments used PMMA (polymethylmethacrylate) samples that were 50 mm wide and 290 mm long with two variations—one sample was a 10 mm thick flat slab, while the other was a 10 mm thick flat sample that had a 4 mm thick grooved center section. The thickness variation had a major impact on the flame shape, and the grooved sample developed a deep inverted-V shaped notch as the thin center section burned through. This notch enhanced heat transfer from the flame to the solid through an effectively wider flame base, which is the part of the flame with the highest temperature. Unlike in normal gravity (and also likely in partial gravity), where buoyant flow promotes acceleratory upward flame growth, the microgravity flames reached a steady size (limiting length) for a fixed forced convective flow in agreement with theory (i.e. there is a zero net heat flux at the flame tip). The limiting length implies that the spread rate of the flame will be controlled by the regression rate (burnout rate) of the material because the flames remains anchored to the upstream end of the fuel samples. This is a significant finding for spacecraft fire safety, and makes the probability of flashover in a spacecraft unlikely as the flame size will be small for low convective ventilation flow environments typical in spacecraft. On the other hand, long-burning flames in small vehicles will generate significant quantities of fuel vapor that may reach the lean flammability limit and cause a backdraft. The rapid extinction of the flame when the flow was turned off also supports the existing fire mitigation strategy on the ISS to deactivate the ventilation system in the event of fire alarm. These findings can be applied to improve the safety of future space exploration missions. 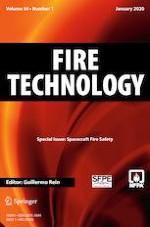