Create an alert for Österreichische Zeitschrift für Soziologie now and receive an email for each new issue with an overview and direct links to all articles.

The paper compares the League of Nations’ program of “Financial Reconstruction of Austria” (1922) and the austerity program for Greece since 2010 (“Memorandum of Understanding”) by drawing on Polanyi’s analysis on interwar Austria. Sect. 1 and 2 look at the similarities between the two economic programs. Similarities are found in the policies implemented (austerity, liberalization, public sector shrinking), the outcomes (economic deterioration, unemployment, weakening of social services) and the political methods (foreign interventions combined with law and order politics internally). Sect. 3 discusses the differences in the two cases. While Austria had stepped out of the Habsburg Empire’s common currency zone in the period concerned, Greece still remains into the Eurozone. In the case of the Greek bailout program, there was no urgent geopolitical expediency, as in the case of the League of Nations’ intervention (to prevent an Anschluss with Germany). Despite these differences and the fact that economic interdependence is deeper today, what makes the two cases comparable, is the “authoritarian interventionism” of the liberal actors involved. It is argued that Polanyi’s concept of “authoritarian interventionism” and his related analysis on fascism have a particularly “Austrian” background (i. e. one relating to the Austrian program), but they are also crucial for the analysis of the Greek austerity politics and the crisis management in the Eurozone.
Advertisement 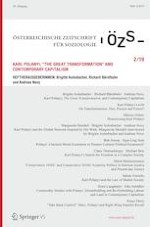 On Transformations: Past, Present and Future?

Commodity Studies with Polanyi: Disembedding and Re-Embedding Labour and Land in Contemporary Capitalism

Karl Polanyi and the Global Network Inspired by His Work