Convergence of inflation with a common cycle: estimating and modelling Spanish historical inflation from the 16th to the 18th centuries | springerprofessional.de Skip to main content
TOOLBAR 1 2 3 4
SEARCH MENU 1 2 3 4

The aim of this paper is twofold. First, to obtain inflation rates for the four regions of Spain analysed for the period 1501–1800 by modelling Hamilton’s (American treasure and the price revolution in Spain, 1934; War and prices in Spain, 1947) price index series by means of an unobserved component model with a common cyclical factor. And second, to prove their long-term convergence process. Therefore, convergence concerns both the cyclical variation of inflation rates common to the four regions, and trend inflation. A complete convergence of the trend inflation occurred once the monetary reforms of Charles II of Spain were introduced in order to redress the previous monetary instability known as inflation of the vellón. The predominance of the vellón in small change and the concentration of the influx of silver when inflation was comparatively lower (second half of the sixteenth century and the seventeenth century) complicate to reach simple conclusions on the monetary origin of inflation exclusively based on precious metals, but, on the contrary, suggest a monetary origin based on copper coin and fiscal distortions. So, monetary stability proved to be a necessary condition for inflation convergence and the fulfilment of the purchasing power parity condition along the eighteen century. 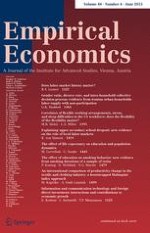 The effect of life expectancy on education and population dynamics

Macroeconomic effects of fiscal policy in the European Union: a GVAR model