Dam reservoirs as an efficient trap for historical pollution: the passage of Hg and Pb through the Ohře River, Czech Republic | springerprofessional.de Skip to main content
SEARCH Menu 1 2 3 4

The concentration of Hg and Pb pollutants was examined in sediments of a central European lowland river, the Ohře River. The pollution originated from several sources that were active mainly between the thirteenth and twentieth centuries. Its passage through the river system has been altered by two dam reservoirs built in the 1960s. The pre-dam pollution levels were evaluated from historical floodplain and dam reservoir sediments. We evaluated influence of damming on pollution status of sediments using the concept of ambient background concentrations based on the examination of polymodality in the distribution of concentrations and identification of breaks between the concentration modes. The Skalka Dam Reservoir has suppressed the transport of Hg pollution from a chemical factory in Marktredwitz, Germany (nineteenth and twentieth centuries): the dam has decreased the Hg concentrations in the downstream channel sediments by an order of magnitude compared to pre-dam conditions. The concentration of Hg in suspended particulate matter in the outflow from the Skalka Reservoir varies between 10 and 60% of the inflow concentrations depending on the discharge. The Nechranice Dam Reservoir has suppressed the passage of Pb pollution originating from historical metal mining, which has led Pb concentrations in sediments downstream to decrease to the levels of average topsoil pollution in the sub-catchments without ore mining. Both reservoirs act as sediment traps and thus play a beneficial role for the quality of the Ohře River downstream environment.
Advertisement

previous article Reactivation characteristics and dynamic hazard prediction of an ancient landslide in the east margin of Tibetan Plateau
next article Impacts of socioeconomic factors on cropland transition and its adaptation in Beijing, China 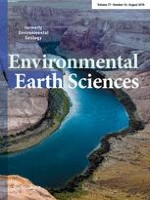 Morphometric and sediment analysis of beach cusp in correlation to rip currents: a case study from tropical coast, West coast of India

Hydrogeochemical behavior of uranium and thorium in rock and groundwater samples from southeastern of El Bajío Guanajuatese, Guanajuato, Mexico

Carbonate precipitation through photoautotrophic microorganisms at the Giza cliff in Okinawa, Japan