main-content
Top
Back to the search result list
​
print
Table of Contents
​
insite
Issue archive
​
archive
​
insite
Print
​
print
​
share
previous article The Killability of Fish in The Sims 3: Pets and...
next article Time to Rethink: A Reflection on the First Five...

A novel method for assessing moral values in computer games is presented in this paper. The method is based on Decision Analysis. It is shown that the decision model presented conforms with the ethical principle of Rule Consequentialism. The model, termed Scale of Morality, can be implemented in strategy and role-playing computer games where, to date, the ethical valuation has been assessed mainly using informal heuristics. The Scale of Morality requires the player (human player, computer agent or game master) to pre-assign value scores to selected ethical criteria prior to gaming. During the game, players make moral choices by valuating each choice with respect to these criteria. The choice corresponding to the highest value score is the most ethical one. Even in the case where the ethical principle is the same for each player during the game, the ethical valuations may differ, as the information process can be asymmetric (e.g. one player acquires more information than another). The game dynamics will be much more complex if the ethical principle of each player is different. Furthermore, the computer agent can be equipped with an expanding information base, making the agent better in judging the consequences of choices. The method Scale of Morality can be a component of the game’s Artificial Intelligence, or serve as a research tool for studying players’ moral reasoning. 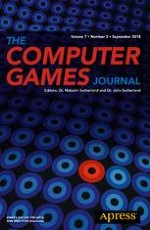 The Killability of Fish in The Sims 3: Pets and Stardew Valley

Time to Rethink: A Reflection on the First Five Years of The Computer Games Journal and the Challenges Facing It