main-content
Top
Back to the search result list
​
print
Download PDF-version
​
download
Table of Contents
​
insite
Issue archive
​
archive
​
insite
Print
​
print
​
share
previous article Correction to: In the Shadow of the Thucydides ...
next article Did Thucydides Believe in Thucydides’ Trap? The...
Activate PatentFit
powered by

Why did the US-China relations take a turn for worse around 2010 despite the bilateral efforts to forge a cooperative framework? Concerned about the danger of conflicts in the course of power transition—namely, the “Thucydides Trap”—in US-China relations, scholars tend to see either a security dilemma at play or an intensification of status competition between an emerging power and the established hegemon. While recognizing the explanatory leverage of the security-dilemma framework and the status-competition model with regard to the continued deterioration of the US-China relations up to Trump, this article asserts that both models fall short in addressing the early origin of the deterioration of US-China relations. The concept “status dilemma” promises to fill the analytic gap thereby left. The status dilemma suggests an inability of two states to grasp the status claims signaled from the other side. Misperceptions associated with status dilemmas fall outside of the purview of the security-dilemma framework, and could lead to the emergence of zero-sum competitions for status. Such misperceptions are apt to occur in a situation of power transition whereby status recognition tends to have geostrategic implications for the great powers involved. This article illustrates this logic of status dilemma via the US-China diplomacy over the “core interests.” This investigation promises crucial insights into the analogy of the Thucydides Trap to US-China relations. 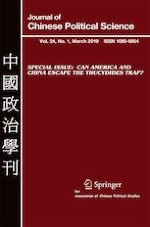 The Perils of Hubris? A Tragic Reading of “Thucydides’ Trap” and China-US Relations