This article describes the problems involved in modelling material cracking in skew rolling processes. The use of the popular damage criteria is impossible because of the lack of a calibration test that would make it possible to determine the critical value of material damage under conditions similar to those found in skew rolling. To fill this gap, a test called channel-die rotational compression was proposed. It consisted of rolling a disk-shaped specimen in a cavity created by two channels of cooperating tools (flat dies), which had heights smaller than the diameter of the specimen. When the rolling path was sufficiently long, a crack formed in the axial zone of the specimen. In this test, modelling using the finite element method made it possible to determine the critical values of material damage. As an illustration, the test was used to determine the critical damage value when conducting a rotational compression process on 50HS steel (1.5026) specimens formed in the temperature range of 950–1200 °C. The analysis was conducted using the Cockcroft–Latham damage criterion. 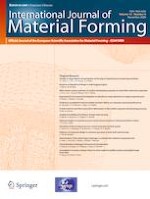