A great deal has been written about the pros and cons of delivering civil and social infrastructure services via public-private partnership (PPP) concessions (Tang et al., 2010), but much less about the governance challenges arising from potential conflicts of interest between the various public and private parties within different phases of PPP infrastructure projects over their 25-year or longer life cycles. The early phases of PPPs involve planning and selecting which infrastructure elements to develop, a very different phase from the infrastructure design and construction phase, which, in turn, is very different from the operations and maintenance phase. In PPP infrastructure service delivery, the public and private sectors both need to be governed for coordinated and aligned work over these very different lifecycle phases. The governance challenge is that the goals and practices of public and private sectors differ significantly; at the same time the set of participants changes across the lifecycle phases (South et al., 2015). The public sector focuses on how the system surrounding the infrastructure service leads to distribution of public utility, whereas the private sector takes the public utility as a given, and focuses on how to deliver the service as efficiently as possible, and make financial gains (Tang et al. 2010; Rufín & Rivera-Santos 2012; Liu et al. 2014; Kwak et al. 2009).
This paper summarizes insights about PPP governance challenges and the lessons learned from more than two decades of experience with alternative governance approaches confronting economically, environmentally and socially sustainable selection, investment and delivery of infrastructure in three Eastern Australia States (Victoria, New South Wales and Queensland). We chose to study Australia, because it is one of the most experienced countries with respect to governance of PPP infrastructure service delivery. We discuss and draw insights about the following four areas of governance:
(1)
Prioritization of Federal and State funds to address the wish-list of infrastructure needs and desires of all regional and sectoral claimants for new or enhanced infrastructure services;
(2)
The procurement process to short-list and select concession companies, termed special purpose vehicles (SPVs) to deliver PPP projects;
(3)
Internal decisions of the SPV board and its key executives over the lifecycle of the concession; and
(4)
Contracts between the SPV and its construction and operations contractors.
Advertisement
These empirical observations of current practice suggest that public utility, institutions, and coordination issues are of importance for PPP infrastructure service, and lead us to form a governance model for infrastructure service delivery.

The insights presented in this paper are derived from a set of semi-structured interviews that the first author conducted with more than 20 senior executives drawn from key participants in PPP investment and delivery — governmental PPP bodies and infrastructure agencies, pension funds and aggregators of pension funds, infrastructure developers, investment banks, investment arms of construction firms, lawyers and bankers — over a 2-week period during December 2015 in three Australian States: Victoria, New South Wales and Queensland. To encourage free-flowing, candid discussion, interviews were not recorded. Extensive notes were taken, coded, redacted and analyzed. The insights about ways to mitigate the significant governance challenges of PPP delivery that have evolved from this shared experience over more than two decades can serve to generate a set of focused research questions for academics to explore in greater depth, and provide high-level guidance to federal and state agencies in countries like the US that have had far less experience delivering infrastructure services via PPP concessions.

Australia’s national Parliament has created an infrastructure agency to help it develop a prioritized list of national infrastructure needs. The agency is called ‘Infrastructure Australia’, and it has a mandate to prioritize and advance nationally significant infrastructure, and to advise government at national and state levels. Like similar agencies created in the UK and elsewhere, a group like this provides some influence over which regional or sectoral projects will receive national funding, but it is challenging to insulate this kind of professional bureaucracy from high level political pressures when the party in power in the government changes, or when new projects that were not previously prioritized are proposed by state, municipal or regional governments, or presented as unsolicited proposals by private infrastructure concessionaires.
The Australian government uses “Value for Money (VfM)” analysis as an important evaluation tool in the infrastructure needs prioritization. The VfM calculates the total expected costs for construction, operation and maintenance of an infrastructure asset over its lifecycle. The calculations are done for public financing and private financing, and then the two are compared. In this comparison, public financing bears lower interest rates than private financing in most developed countries that have sound credit ratings. So, in order for the PPP alternative to be selected, the savings to the public through greater efficiency and quality of design, construction, operation and maintenance, as well as from the expected value of the risks of construction cost overruns and user demand shortfalls that the government can shift to the SPV under a PPP concession regime, must exceed the PPP’s higher financing and transaction costs.
Advertisement
The application of this VfM process has been criticized in Australia because of the difficulty entailed in capturing the full cost of public financing and public procurement and supervision of design and construction. Moreover, public maintenance is seldom provided at the same level of quality as what is required in PPP agreements. Thirdly, determining the expected value of risk transfer for construction cost overruns and user demand shortfalls requires considerable judgment.

Three Australian State governments—Victoria, Queensland and New South Wales—have established independent statutory bodies to prioritize statewide infrastructure needs; legislators will still make the final calls on funding projects but cannot easily ignore these priorities to favor regional or other special interests. To the extent that these agencies publish and widely disseminate their prioritized lists of statewide projects, it becomes increasingly difficult for the legislature to ignore their rationally prioritized projects and justify to the public investing in a lower priority project, or one that has not previously been considered.
Sponsors of unsolicited, “market-driven” PPP proposals must justify sole-source negotiation between the government and the SPV rather than an open call for proposals based on a project’s “uniqueness.” These proposals have only occasionally been accepted; and virtually all of the handful that have been accepted thus far involve expansion of the scope of existing assets. The perceived difficulty in managing the interface between the entrenched concessionaire and a new concessionaire whose construction or operations might interfere with the existing concessionaire’s operations has been the main justification for claiming “uniqueness” that has been accepted thus far as a basis for sole source unsolicited proposals. This “uniqueness” criterion clearly runs the risk of increasing the concentration of ownership of infrastructure concessions in a given sector by expanding the number and scope of facilities already being operated by existing P3 concessionaires—in the Australian toll road concession sector, Transurban™ is already a dominant player in Australia, and has had sole-source expansions of its existing concessions approved.

In their PPP concession agreements with the government, SPVs typically agree to very strict limits on making any claims for additional payments from the government for construction cost or time overruns. The concession agreements typically even disallow claims for extra time or cost due to differing site condition, or worse than average weather, with exceptions only for a limited and very specific set of force majeure definitions such as storms or floods larger than the 100-year return period. These concession agreement terms are then passed down to the SPV’s design, construction and operations contractors to prevent construction or operations claims from impairing the SPV’s equity, potentially triggering debt defaults or renegotiations due to violations of loan covenants. In fact, part of the due diligence process by lenders involves a “gap analysis” of any differences in contract terms at the two levels— government to concession vs. concession to contractor—that could impair the SPV’s equity. Tough, firm, fixed-price contracts that set very tight conditions in the contract between the SPV and the design-constructor for making construction claims also simplifies or eliminates many potentially conflictual governance issues within SPVs owned by both Industrial and Financial equity investors.

Pension funds have historically not been direct investors in new, “greenfield” infrastructure projects—with a small number of notable exceptions such as the Ontario Teachers’ Pension fund. Traditionally pensions have required extensive internal committee review and approval of significant financial commitments in, or changes to, their investments. The same has been true for some of the pension aggregators, with internal committees that can create delays for urgent decisions that need to be made by the SPV Boards. This made them unattractive partners to infrastructure developers and builders who are able to delegate more decision-making authority to their SPV directors and managers. Increasingly, Australian aggregators of pension funds wanting to invest in greenfield infrastructure assets have been acquiring and/or developing significant internal capacity and/or relationships with external advisors that allow them to invest directly in the equity of greenfield infrastructure assets. The most experienced pension aggregators have changed their internal governance accordingly to allow them to appoint board representatives in the SPV’s who are authorized to make substantial financial commitments and decisions without prior approval from their own or the participating pensions’ investment review committees or boards. This makes them more attractive SPV partners in greenfield infrastructure projects for the more sophisticated investment funds and other participants in SPV equity.

The description of practices and models used for PPP infrastructure service delivery in Australia shows that private and public actors there have developed working practices and models for infrastructure service delivery that address many of the key governance challenges. The Australian experience shows the benefits of having professional national and state-level infrastructure units that are independent of the legislatures prioritize national infrastructure needs. The model for national needs prioritization is that parliament has created an agency that provides analysis of national infrastructure needs, and advises government at all levels on its prioritization. Government ultimately decides which infrastructure assets to develop, guided by these priorities, and uses rigorous Value-for-Money analyses to select the delivery approach used to finance and develop the selected infrastructure assets. In the Australian case, coordination over the different lifecycle phases of an infrastructure asset is also increasingly being governed by stipulating that the SPV concession must be owned and governed by its initial investors for an extended time period, including design, construction and a ramp-up period of several years of operation and maintenance. The division of responsibilities of private actors and the public is governed in an elaborate and precise performance contract that stipulates the responsibilities of the private actors in operation and maintenance of the asset. Thereby, the government can use contract enforcement to achieve the desired infrastructure service for the public.
The Australian case shows that the relationship between private investors and private infrastructure service providers can be made clear and can be governed so that long term stewardship of the asset is promoted. The mature set of governance arrangements that they have evolved significantly mitigate the problems of changes in the active participants and their conflicting sets of interests across lifecycle phases, since the long term operating responsibility for the concession increasingly bridges over the incentive-incompatibility of a conventional publicly financed, design-bid-build process across the successive phases of the provisioning and use of infrastructure services (Henisz et al., 2012). 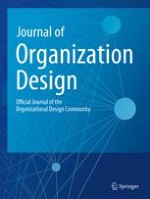 Playfulness, ideology and the technology of foolishness in the creation of a novel market niche for distributed control: The case of iPLON

Changes in the structures of U.S. companies: action implications for executives and researchers

Complementarities and organizational (Mis)fit: a retrospective analysis of the Toyota recall crisis

Is there a dark side of Big Data – point, counterpoint