So far a huge number of dynamic game models, both discrete and continuous, have been developed for reservoir operation. Most of them seek to overcome potential conflicts while allocating limited water among various users in reservoir systems. A number of them have successfully provided efficient approaches to tackle the problem of optimal water allocation. There are, however, still weaknesses in determining optimal policies. By taking account of the random nature of the inflow while producing monthly operating policies for a reservoir in a dynamic non-discrete framework, many of these deficiencies can be eliminated. In this study, considering the randomness in reservoir inflow, a continuous dynamic game model for water allocation in a reservoir system was developed. A corresponding monthly-basis solution based on collocation was then structured. This collocation method does not rely on first and second degree approximations. Instead, in order to evaluate the uncertainty triggered by the random variable, a discrete approximant was applied to quantify the random variable in the state transition function. A case study was carried out at the Zayandeh-Rud river basin in central Iran to identify the efficiency of the proposed method and evaluate the effect of uncertainty on decision variables. The results of the presented model (i.e., monthly-basis operating rules and value functions) proved to be more practical and reliable than similar continuous dynamic game models working on an annual basis. Moreover, the results show that bringing the stochasticity associated with inflow into the equation has an impact on the value functions and operating polices. Indeed, applying the mean of the random variable of inflow (deterministic form) reduce consistancy in monthly reliability indices throughout the year. 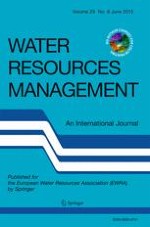