In this work, we initiated the effort of developing a so-called water microflotilla, which was capable of moving on a water surface. We explored its design, fabrication, propulsion, and motions in straight and circular channels. A water microflotilla comprised five microboats connected with a Nylon rope, and was fabricated using ultra-violet lithographic techniques. It was actuated by the difference between fore-and-aft surface tensions. The water microflotilla was tested in three straight and one circular channels at water levels of 3, 6 and 9 mm, respectively. In all the tests, the microflotilla moved like a rigid object, and no collisions were observed between neighboring microboats. Travel distances were above 0.44 m, and average speeds varied from 40.2 to 103.2 mm/s. Both the travel distances and the average speeds were found to increase with the increasing water depth and channel width. The two ends of the microflotilla had direct contact with the outer sidewall of the circular channel during a circular motion. The support forces of the outer sidewall at these contact points provided the centripetal force needed for the circular motion. Compared with a single microboat, such a microflotilla can be potentially employed to transport a large amount of supply in small-scale fluidic applications. 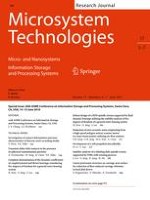