Scholars warn that neoliberalism erodes investment in the well-being of others by prizing the self-interested individual. To empirically investigate this claim, we surveyed 307 white, cisgender, heterosexual adult women across the US. First, we conducted a latent profile analysis using 6 indicators and identified 3 distinct sociopolitical profiles. In addition to typical Traditional and Progressive belief profiles, we observed one reflecting neoliberal ideology. Politically, women in the Neoliberal group held a centrist political orientation and relatively high neoliberal beliefs. Regarding social equality, they exhibited middling support for LGBTQ people and comparatively low gender equality beliefs. On interpersonal attitudes, they reported the lowest empathy as well as perspective-taking. Second, we examined the profiles’ associations with dedication to the welfare of others. Neoliberal-grouped women endorsed taking relatively low sociopolitical actions and were the least likely to donate money to marginalized women, while the most likely to keep it all for themselves. Although they held liberal attitudes toward their own sexual behavior, they imposed the highest sexual double standards on others and most strongly endorsed the use of others for one’s own sexual pleasure. Our findings reflect concerns that neoliberal ideology marks a departure from consideration of—and commitment to—others in both sociopolitical and personal domains. We discuss implications for social justice and welfare.
Advertisement

previous article Judicial and Litigant Perceptions in Dutch Court Cases: Perceptions of Outcome Importance Overlap, Perceptions of Procedural Justice Diverge
next article Personal Versus General Belief in a Just World, Karma, and Well-Being: Evidence from Thailand and the UK 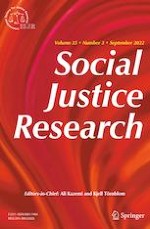 Comparing Teachers’ and Students’ Perspectives on the Treatment of Student Misbehavior

Personal Versus General Belief in a Just World, Karma, and Well-Being: Evidence from Thailand and the UK