The present study includes analysis of six heavy metals, to determine spatial distribution and potential ecological risk at 10 stations of the Gulf of Kachchh, Gujarat, India. The geochemical exploration of toxic heavy metals on Gulf of Kachchh was evaluated using hierarchical cluster analysis (HCA). Pollution indices such as contamination factors (CF), pollution load index (PLI) and degree of contamination (Dc) were used to analyze the potential risk of Cu, Ni, Cr, Cd, Pb and Hg to the ecosystem of Gulf of Kachchh. The mean concentrations of six heavy metals were in the following order: Cr > Cu > Ni > Pb > Cd > Hg. Spatial distribution clearly indicated industrialization and domestic waste of major cities as sources of heavy metal contamination. Pollution indices revealed that Cu contamination at some of the stations was on the rise due to direct or indirect discharge from natural and anthropogenic sources which is of major concern. Despite episodic contamination by heavy metals on marine ecosystem of the Gulf of Kachchh, information obtained from geochemical characterization could be useful to develop effective management strategies to policy-makers and stake-holders.
Advertisement
previous article A study of the symbiotic relationship between tectonic fissures and faults in the Fenwei Graben System, China
next article Prediction model of water yield property based on GRA, FAHP and TOPSIS methods for Ordovician top aquifer in the Xinwen coalfield of China 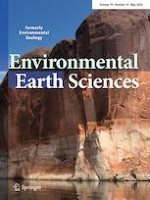