This study aims to examine the relationship between national cultural dimensions and the probability of a firm being externally audited. It uses a large set of representative micro-data from nearly 3000 firms across 34 industries in 13 countries in Eastern Europe and the Middle East over the period 2008–2010, and Schwartz’s cultural dimensions, namely autonomy, embeddedness, egalitarianism and hierarchy. The findings show that the relationship between firm audits and cultural autonomy and egalitarianism is strongly positive and statistically significant. Specifically, they show that an increase of one standard deviation (SD) in affective autonomy increases the probability that a firm will engage in an external audit by 3.37%. Along the same lines, a 1 SD increase in egalitarianism leads to a 8.36% increase in the likelihood of a firm engaging in an external audit. However, there is no clear evidence that embeddedness and hierarchy play a role in firms’ external auditing trends. These findings remain robust to the use of several confounding factors at the firm and country levels. This research highlights its uniqueness in the choice of national culture as a determinant for the likelihood of external audits. 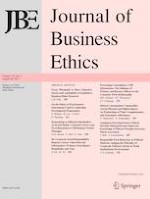 Ethical Consumption Communities Across Physical and Digital Spaces: An Exploration of Their Complementary and Synergistic Affordances

On the Ethics of Psychometric Instruments Used in Leadership Development Programmes

From ‘Whodunit’ to ‘How’: Detective Stories and Auditability in Qualitative Business Ethics Research