Register Login
previous article Transformational Leadership and Voice: When Does Felt Obligation to the Leader Matter?
next article Measuring Guanxi Quality in the Workplace 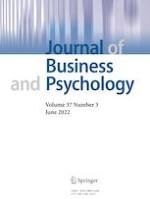 Transformational Leadership and Voice: When Does Felt Obligation to the Leader Matter?

Correction to: Measuring Guanxi quality in the workplace

The Impacts of Distinct Motives on Promotive and Prohibitive Voice: The Differential Moderating Role of Perceived Voice Level