Create an alert for Journal of Materials Science now and receive an email for each new issue with an overview and direct links to all articles.

The present context of technological scenario, requirement of developing low rolling resistance passenger radial tyres with naturally occurring environmental friendly materials is inevitable. Several studies have been reported by using silica filler in place of carbon black for improving the rolling resistance property. In the present study, an attempt has been made to investigate the effect of biodegradable Indian corn powder in tyre tread compound as filler. The effect of corn powder in gum and filled compound of both natural rubber (NR) and styrene butadiene rubber (SBR) based compound has been studied. It was found that corn powder of 200-mesh size increased thermal stability of NR compound and acted as a non-reinforcing filler. It also affected the fatigue properties and abrasion loss when the carbon black was partially replaced with corn powder. However, an improvement in the temperature build up (TBU) and tan δ at 60 °C (a representative of rolling resistance property of tyre) was observed. 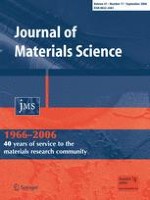 Effects of RE3+ as a co-dopant in blue-emitting long-lasting phosphors, Sr3Al10SiO20:Eu2+

Fractal geometry of fracture surfaces of a duplex stainless steel