In the present study the effect of relative humidity (RH) during spin-coating process on the structural characteristics of cellulose acetate (CA), cellulose acetate phthalate (C-A-P), cellulose acetate butyrate (CAB) and carboxymethyl cellulose acetate butyrate (CMCAB) films was investigated by means of atomic force microscopy (AFM), ellipsometry and contact angle measurements. All polymer solutions were prepared in tetrahydrofuran (THF), which is a good solvent for all cellulose esters, and used for spin-coating at RH of (35 ± 5)%, (55 ± 5)% or (75 ± 5)%. The structural features were correlated with the molecular characteristics of each cellulose ester and with the balance between surface energies of water and THF and interface energy between water and THF. CA, CAB, CMCAB and C-A-P films spin-coated at RH of (55 ± 5)% were exposed to THF vapor during 3, 6, 9, 60 and 720 min. The structural changes on the cellulose esters films due to THF vapor exposition were monitored by means of AFM and ellipsometry. THF vapor enabled the mobility of cellulose esters chains, causing considerable changes in the film morphology. In the case of CA films, which are thermodynamically unstable, dewetting was observed after 6 min exposure to THF vapor. On the other hand, porous structures observed for C-A-P, CAB and CMCAB turned smooth and homogeneous after only 3 min exposure to THF vapor. 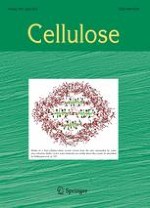 Arabinoxylan structure affects the reinforcement of films by microfibrillated cellulose

The molecular basis of the adsorption of xylans on cellulose surface