Create an alert for Thermal Engineering now and receive an email for each new issue with an overview and direct links to all articles.

The paper presents the results of studies on stresses occurring in 20Kh13 grade steel samples under different-types surface modification, such as boronizing, ion nitridizing, Cr−CrC ion-plasma coatings, pulsed laser treatment, and their combinations. The studies on the stresses has been carried out according to a technique based on measuring the deformation (bending) of the sample. From the surface profiles measured before and after the modification, normal bending values have been obtained and then used in order to evaluate the stress change. Resulting from the studies, it has been found that the presence of compressive stresses in the surface layer can be judged in the course of pulsed laser treatment by the character of normal bending. In the case of applying a Cr−CrC coating after a pulsed laser treatment, the surface bending exhibits a decrease, which indicates a decrease in the final level of compressive stresses. Upon combining the types of surface modification, including the deposition of a Cr−CrC coating followed by a pulsed laser treatment, transition from compressive to tensile stresses in the surface layer is observed with an increase in the coating thickness. Reducing the depth of the nitridized layer leads to a decrease in tensile stresses. The formation of Cr−CrC coatings having different thicknesses on the 20Кh13 grade steel surface leads to the formation of different-level stresses. Combining Cr−CrC-based coatings with different thickness values having several types of nitridizing can lead to stress reduction in these combinations and to an erosion resistance level superior to that of stellite. The obtained specific input energy depending on internal stresses in the surface layer—indicating the fact that the incubation period of the erosive wear process is finished—can be used to predict the erosion resistance level of the surface after modification. Such a prediction can be performed according to the measured stress level at a stage of choosing a protection method.
Advertisement 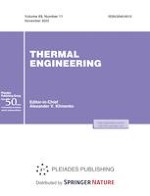 HEAT AND MASS TRANSFER AND PROPERTIES OF WORKING FLUIDS AND MATERIALS

A Device for Optimal Control of an Autonomous Photovoltaic Power Supply Source: Development and Test Results