The creep resistance of the 9% Cr–1% W–1% Mo steel subjected to quenching from the temperatures of 1050 and 1150°C, cooling in the air, and further tempering at a temperature of 750°C for 3 h has been studied at a temperature of 650°C and applied stresses of 160, 140, and 120 MPa. An increase in the quenching temperature from 1050 to 1150°C leads to a growth in the average size of prior austenite grains from 25 to 93 µm due to the dissolution of MX carbonitride particles enriched in niobium under exposure in the austenite region. An increase in the size of the prior austenite grains is accompanied by a decrease in the average size of blocks and martensite laths by 17 and 43%, respectively. Moreover, an increased temperature of heating for quenching provides favorable conditions (fraction of boundaries, density of dislocations, and content of doping elements in a solid solution) for the precipitation of carbide М23С6 and carbonitride МХ particles of smaller size under tempering. The improvement of structural hardening due to a decreased size of blocks and martensite laths and dispersion hardening due to nanosized VX particles has a positive effect on the creep resistance by decreasing the minimum creep rate and the duration of the transient creep stage to increase the time until rupture by several times.
Advertisement
previous article Effect of Crystallization Conditions on the Microstructure, Crystal Structure, and Mechanical Properties of a Fe–Mn–C Alloy in Microvolumes
next article Cyclic Strength of the Zr–1% Nb Alloy after Equal Channel Angular Pressing 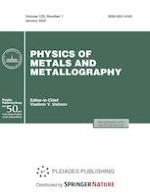