Create an alert for Gesunde Pflanzen now and receive an email for each new issue with an overview and direct links to all articles.

» Get access to the full-text
Important notes
The original version of this article was revised: Modification have been made to the formulas in the PDF file of this article.
An erratum to this article is available online at https://​doi.​org/​10.​1007/​s10343-019-00479-1.

In the past few years, a considerable decrease in growth and development of landscape plants was recorded, possibly due to chronic exposure to toxic pollutants, with dust probably playing a major role. In the current study, Murraya paniculata were grown in a greenhouse for a period of 4 months, during which roadside dust was sprinkled daily on the slightly damp leaves at different concentrations: T0 (0 g/plant-control), T1 (1 g/plant), T2 (3 g/plant) and T3 (5 g/plant). Roadside sediments were collected with a vacuum pump and passed through a filter to obtain a fine particle size (less than 800 μm). Phenotypic studies of leaves revealed that continuous addition of undesired dust effluents affects the foliar surface of the leaves and changes its morphology. Treatment with dust significantly increased the abscisic acid concentration of leaves and shoots and the effects were more severe in high level of dust treatments. Compared to control, chlorophyll, porphyrin, chlorophyllide and pheophytin contents were significantly decreased in the dust treated groups. In contrast, carotenoid and polar carotenoid contents were not influenced by dust (p > 0.05), while non-polar carotenoid contents were significantly reduced by different levels of dust treatments. This study concludes that roadside dust depositions have degradative effects on photosynthetic pigments, with extensive effects on growth and development of plants. 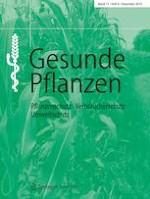 Erratum to: Effects of Chronic Dust Load On Leaf Pigments of the Landscape Plant Murraya Paniculata

The Effect of Air Pollution on Developmental Stages and Pollen Germination, Pollen Tube Growth and Fruit Set of the Apple Cultivars ‘Golden Delicious’ and ‘Golab’